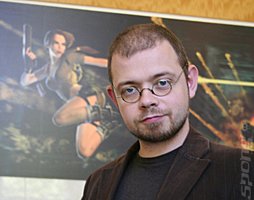 Toby Gard
All Images (11) »
The Guardian's Greg Howson has just posted a short interview with Toby Gard, the original designer of Tomb Raider?s Lara Croft, whilst over on Radio Five Live?s Up All Night programme this weekend, SPOnG managed to catch an interview with Karima Adebibe, the rather lovely lady who is the new real life Lara Croft. It certainly seems as if Eidos? PR department have been extra busy over the last few weeks!

Speaking about Legend and his own role in the making of the game, Gard had the following to say: ?The game has turned out so well because there is so much attention to detail from the guys [at Crystal Dynamics]. I came in at pre-production when they had all the game set up and I was bought into redefine Lara's look and then the other characters and the story. I worked closely with the story team too, to help define who Lara actually is. It's a question of adding details to her personality and not just physically.?

When quizzed about the difference between making the original Tomb Raider 10 years ago, compared to making Legend, Gard noted: ?It's all about detail now. The gameplay is fairly similar to what it was in the original game. So you have combat, exploration and puzzles. But it's the fidelity that is the difference now. Big basic blocks don't cut it anymore - you need swaying grass and butterflies now. Also the team for Legend is ten times as big the original team. It's gone from six to 60.?

When quizzed about Galleon, Gard was somewhat more circumspect, merely commenting: ?I learnt a lot about the industry, let's put it that way.? But - like the Murphys - he?s not bitter.

Gard also went on to outline why he originally left Core Design, due to creative differences over the way in which Tomb Raider/Lara was being marketed: ?The marketing?represented Lara in a way that was nothing like the character. At the time, I didn't like that and it prompted me to want to retain control of characters I created in the future, so that's why I left.? Fair enough, SPOnG supposes.

Perhaps the most shocking revelation Gard makes is that Lara Croft was nearly Luke Croft, after being asked the character designs he'd scrapped before deciding on the final Lara, Gard answered: "About four or five. My initial design was a guy in some tombs. But when I started doing proper designs the female character just worked better."

Finally, when talking about the goal for Legend, Gard simply stated that, ?...the goal was to modernise the puzzle elements from before. You really have to think physically now to solve a puzzle.? SPOnG salutes you, Mr Gard, for you have certainly brought back a legendary series from the brink and created a truly superb videogame. You can read our full review of Lara Croft Tomb Raider: Legend here.

As the BBC man sagely notes, ?As an [entertainment] editor choosing what to put in an entertainment section, do you go with pictures of Robbie and an interview about life on tour? Or do you go instead for the latest screenshots of a video game, along with some words from the game's developer? This is precisely why British games company Eidos have spent so much time and effort over the years trying to convert Lara Croft from a computer-generated beauty into a living, breathing person.?

And Karima Adebibe is that living, breathing person. Or at least, she is the latest in a line of models. Her current contract is only for 12 months, so it?s anyone?s guess right now if she is going to stay the course as Lara or is she going to disappear back into obscurity as soon as the game?s successfully sold in its trillions? Nell McAndrew wins the SPOnG award for being the best-remembered Lara model, whilst Angelina Jolie?s movie Lara still holds a small, dear place in our heart.

Adebibe is the first person that Eidos is actually allowing to 'be' Lara, so she is allowed to speak as the character, as well as pose for the E3 nerd crew as they poke their lenses into her ample features. This would explain the finishing school /elocution and acting lessons, then.

She told Radio Five that, "In the beginning, it was a little bit surreal? But because of all the training, I really do feel like Lara Croft now. It's incredible."

tyrion 18 Apr 2006 13:16
1/1
Wouldn't you have thought that Eidos could have afforded to have that thing coming out of Toby's ear removed from the photograph? :-)
Posting of new comments is now locked for this page.