More than any Tomb Raider title to date. 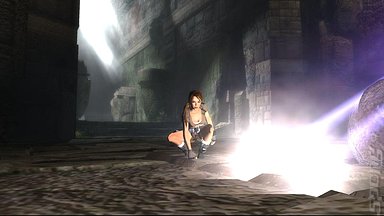 All Images (3) »
Big name franchises and licensed products win out again this week, whilst a number of critically-acclaimed, quality titles, which perhaps don?t get the marketing support they really warrant, seem to flounder. Funny, that...

There's no real surprise about what?s gone straight into the number one slot this week. The latest Tomb Raider game, Lara Croft Tomb Raider: Legend gave the market a bit of a boost, boasting the largest sales week across all formats for any game in the series to date, selling just over 96,000 copies in its first week.

Slipping to number two this week is EA?s The Godfather, following healthy sales in its first two weeks on the market. EA also holds onto the number three slot with FIFA Street 2, which continues to sell well, especially on PS2.

Perhaps the most disappointing news of the week is that newcomer Red Octane?s Guitar Hero ? one of SPOnG?s current PS2 favourites ? hardly rocks the chart this week, limping in at 28. More fey indie pop than heavy metal powerchord. We hope that the title is a slow burner and that word of mouth will boost its long term performance, as it really deserves to sell.

Two other new releases hit the chart this week, with 2K Sports/Take 2?s Top Spin volleying in at 13, a surprisingly early spring release for a tennis game; and the first Tom Clancy game on PSP, Tom Clancy?s Splinter Cell: Essentials straight in at 25.

In rubbish movie-tie-in game news, Ice Age 2 is ? somewhat shockingly ? up from last week's number 14 to four this week, thanks to the release of the movie. Watch it disappear off the face of the charts as soon as the movie has enjoyed its short-lived Easter heyday.

In 'actually quite good' movie-tie-in game news, King Kong: Official Game of The Movie jumps from 23 to 15, possibly fuelled by heavy TV advertising for the feature film's DVD release.

Other games which SPOnG likes which are annoyingly performing average-to-poor sales-wise this week include SEGA?s arcade-perfect Outrun 2006: Coast 2 Coast at 20; Atari?s Driver: Parallel Lines down from 10 to 24, Ubisoft?s Blazing Angels: Squadrons of WWII diving perilously from 12 to 27 and - most shockingly of all - Ubisoft/Crytek?s Far Cry: Instincts Predator makes a beeline from the charts - going from eight to 30.