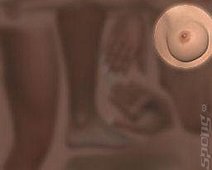 SPOnG just spoke to Michelle Seebach Curran, Eidos' Director of Public Relations in the US, to get the handle on the Tomb Raider nipple rumours which have been titillating Interweb gaming sites today. Some stories suggesting that Tomb Raider: Legend's release date has slipped because of the appearance of a rogue nipple.

Ms Curran replied; "Oh my God. There will be no nipples shipping with this game."

The furore seems to have started yesterday with the publication of a story on Xboxic, which claimed that the game?s US release date of April 11th had been moved back after someone had posted textures of the game to a forum clearly showing nipples on a bare breast.

Bizarre, slightly ?wrong? pictures of which we are happy to show you right here.

According to the Xboxic story:

The game contains a chapter set in Tokyo, where several women are dancing in the distance. To keep it simple for the animators they had initially modeled all the women naked, so they could simply drape different dresses around them later. Why the breasts were there complete with nipples initially I don?t want to know, but the funny thing is that the developers did their work right: in the final version of the game that part of the texture is not even mapped to any points in the meshes. Translation for the less-technical people is that it is beyond impossible to see the breast in-game, you can only see it when you are ripping textures out of the game?s files?
What this all means is that because of America?s well-known hypocrisy towards nudity (half the population sucks on nipples frequently for the first few months of their life but then you aren?t allowed to see them for 18 years), Eidos has issued a fix to be applied to the game?s files and take the few days delay this causes for granted.

Xboxic reckons it?s only the PC version which is slipping a few days to have this nipple problem extracted. After the dabacle surrounding the GTA: San Andreas' Hot Coffee mod, whereby players could unlock a low key, half-baked sex romp mini-game, this all seems quite plausible.

However, according to Eidos it is not true, and the game will be released as scheduled.

In the interests of true investigative journalism, SPOnG intends to look much deeper into this nipple slipping story. Coupled with Janet Jackson's Superbowl exposé, it seems the US public definitely has an aversion to the lowly nipple.