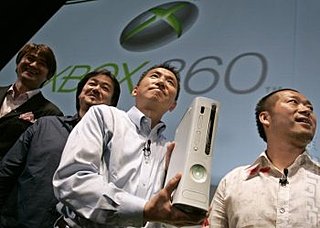 Staggering into the light in Tokyo, SPOnG brings you the full skinny on what Microsoft has planned for the Xbox 360 in Japan. The conference began with Xbox Japan lead Takashi Sensui admitting that the 360 has 'very much underperformed' in the country, a fact not lost on the largely Japanese audience, comprised of press, retail executives and various third-party publishing representatives. Microsoft also issued a no photo or video directive, enforced by a small army of patrolling security staff.

A short, somewhat baffling explanation of XNA followed, along with the underlined commitment to the Xbox 360 FIFA bundle and the promise that every attendee would be taking home their very own soccer ball...

Sensui did point out that some areas of 360 have been a success, with the Xbox Live Marketplace seeing 520,000 downloads in Japan, a higher rate, per unit, than anywhere else in the world running at 5:1.

It is this online strength Microsoft is seeking to build on, announcing some massive additions to the Xbox Live Arcade service. Sensui announced non-specific support from Konami, Hudson, SNK, Namco, D3 Publisher and Bandai. Games highlighted including Galaga and Pac-Man. Various Anime HD exclusives were also announced with Zegapain perhaps the biggest, though we'll defer to Lupos on that.

The bigger announcements then began rolling in. A trailer for a new online Gundam game was shown, bringing the first real spark of cheer to the crowd. This was immediately followed by the announcement that Namco's Culdcept Saga would be going online over Live.

Final Fantasy godfather Hironobu Sakaguchi then took to the stage, bringing about absolute silence. Sakaguchi's like Elvis in Japan, just not fat and still alive. And a maker of role-playing games rather than brilliant rock 'n' roll tunes, followed by really horrible 70s ballads. Sorry. The big news he offered was that Blue Dragon, the RPG currently underway at his new Mistwalker studio will be launched during winter of this year. He also outlined that a demo of the developer's next title, Lost Odyssey will be released in Autumn.

An undisclosed Final Fantasy game was also promised for 2007, not by Sakaguchi, we hasten to add. To pour petrol on the fire was the announcement that Tri-Ace is developing an unnamed action RPG exclusive to 360.

A new Sylpheed game was then on the block, with Game Arts announcing a joint project with Square Enix known as Project Sylph, an astounding shooter from what we could tell. This revelation stirred more interest than the distant promise of a Final Fantasy.

More attendees left muttering that no 'Tales of' game from Namco was on offer, a title which Microsoft reps have touted repeatedly, if off the record, as being in the bag. The other surprise no-show was Sega Phantasy Star Universe, another game various sources had confirmed to many journalists on the run up top the show. Indeed, the complete lack of new Sega software came as a great surprise to many, though it is expected that Sega will comprise a major part of Microsoft's E3 conference this year.

Let us know your thoughts after the jump.

In other words... Please buy or product... PLEASE!!! How desperate can you be Microsoft????? Just stick to the Western markets where you do have a chance to compete with Sony's Giant Name Brand.

In other words... Please buy or product... PLEASE!!! How desperate can you be Microsoft?????

And any other companies' announcements aren't saying buy our product...

jadnice wrote:
Just stick to the Western markets where you do have a chance to compete with Sony's Giant Name Brand.

Why should they stick to Western markets when Asia is going to be a massive future marketplace? It wouldn't make business sense for them to give up on the asian market and Japan is a good as place as anywhere to start.

animetuc 6 Apr 2006 15:48
3/5
I Agree that MSoft has work to do in Japan. But people should stop thinking of these companies as big softees, they are all multi-national corps (Nintendo, M'soft and Sony inclue) They are never going to stop trying to expand their market share in other territories. Japan is hardened to the Xbox brand, and it's M'soft's right to try to get them to jump on the bandwagon. Hope they gain ground in the land of the rising sun. It's M'soft's existance as a game maker that has given the western world respect from Sony and Nintendo (IE no more year- and-a-half waits for consoles/Games to release in the U.S. After Japan)
PTB A Sony, Microsoft and Nintendo Fan!
Fanboys are so meaningless.

OptimusP 6 Apr 2006 17:45
4/5
I like the fact that MS is going to use old-school games from 20 years ago and offering them on Xbox Live to try brake the japanese market and at the same time disses Nintendo's Virtual Console because gamers don't want to play Super Mario Bros when there are "superior" games around like Halo (no really, some MS exec actually compared Super Mario Bros to Halo)...riiiiiiight...

thane_jaw 6 Apr 2006 22:46
5/5
I'm hoping that Japan drops the slightly xenophobic approach to western games - having said that we only see the best Japanese games, we give them all our poorly localised (read translations on a par with "all your base are belong to us) and repetitive sequels.

Its not as if Asian markets in general reject western games (Starcraft in Korea is a little too obvious an example, but the most fitting - GTA:SA also did well in Japan, but no where near the success it had in the states and over here) we just need to export to them the same quality of games like Metal Gear Solid which is imported to us. Hopefully MS will be able to do it with their relaunch - if anything for the good of western developers in Japan.