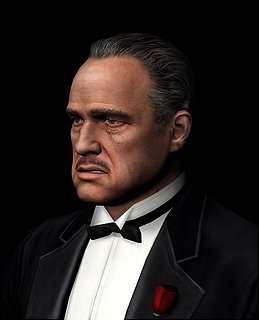 Vito
The Godfather unsurprisingly takes its place at the top of this week’s All Formats chart as supplied by ChartTrack, whilst last week’s surprise chart-topper, The Elder Scrolls IV: Oblivion, drops from the top slot down to number two.

The post-launch sales drop-off for The Godfather wasn’t too noticeable for EA, with sales down 3% on last week, its first week in the chart. The same, unfortunately, cannot be said for Take 2’s superlative RPG The Elder Scrolls IV: Oblivion, with sales down 55% on last week. This is called the power of licensing and marketing, something that Electronic Arts knows plenty about. And on that note, EA’s FIFA Street 2 crawls back into the top three at three, while Sony’s party game, Buzz! The Big Quiz slips one place down to four.

The only increase in sales for any of the games in this week’s top ten was for Tom Clancy’s Ghost Recon Advanced Warfighter, bolstered by the launch of the PS2 version last week.

It's nice to see a DS title in the top ten this week, something we haven’t seen for some time. Animal Crossing: Wild World has become the fourth fastest-selling DS game in the UK: the first three fastest sellers are launch title Super Mario 64, wi-fi racer extraordinaire Mario Kart DS and mental mini-gamer Wario Ware Touched!

Of the seven other new releases in the All Formats Top 40 this week, notables include the latest iteration of SEGA’s popular arcade racer Outrun 2006: Coast to Coast (PSP, PS2, Xbox) limping in at a disappointing number 18, and Eidos' Championship Manager 2006, in at nine.