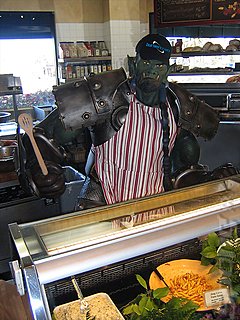 All Images (3) »
Some people like April Fools Day. But then some people like being tied to a bed by a dwarf and forced to drink his milk enema while enduring clothes pegs on their nipples. Here at SPOnG we like neither April Fools or bum juice. However, that won't stop us cynically publishing a top five April Fools 2006 piece, like the one you're about to read.

SPOnG's favourite rubbish ruse this year is actually, and somewhat annoyingly, quite good. The craaaazy cats at Bungie put out the first images of their new game, Pimps at Sea, an isometric pimp simulator on the high seas. We were very much enamoured by the artwork showing a docking pimp and his cattle, whisking us back to days playing quite rubbish strategy games on our Amigas, wishing no doubt that aside from the three discs Colin gave us filled with four bitmaps of a piece of the worst digitised pornography ever, we had some more captivating mature content for our 16-Bit Commodores.

According to Bungie, 10% of those reading Pimps at Sea fell for it. As did we, though in a falling in love with the concept, rather than falling for the joke kind of way.

We saw a new NES portable crop up in a few places too, with Dark Zero probably netting the best version of an April Fool now in its sixth year. According to the site,

...a selection of three of the Revolutions top creative minds proudly unveiled their Portable-NES (P-NES) adaptors to the world. At this time it is still unknown what the full implications of this accessory will be yet but it is expected many of the biggest Nintendo fans throughout the world will be pleased with what they see once Ninty show their P-NES to a salivating worldwide audience. Sources say that due to the accessories name it is thought the new peripheral will allow players to play old NES games downloaded from Nintendo?s Virtual console service on one of Nintendo?s handheld consoles (expected to be the DS). These downloaded games can be transferred from the Revo to the chosen handheld via a USB (or equivalent) lead.

We first heard of a NES adapter for the Nintendo 64 back in 2000, strangely enough on the first of April. A good ruse never dies.

Blizzard spent some time in between perusing Ferrari dealerships to offer to the world its latest expansion, a restaurant chain know as BurgerCraft. ?The grand opening of the first BurgerCraft restaurant is set to take place on June 1, 2006 in downtown Los Angeles, California. At BurgerCraft, players will have a chance to truly taste the flavor of Blizzard's games and savor traditional dishes from all the company?s popular game universes. BurgerCraft will be open to customers of all ages and will provide a fun environment for the whole family?

From the official BurgerCraft press release:

"Blizzard has experienced tremendous growth in the past 15 years, but none of that growth would have been possible on an empty stomach," said Mike Morhaime, president and cofounder of Blizzard Entertainment. "BurgerCraft will allow us to share many of Blizzard?s delicious secret recipes and celebrate the rich cuisine of the Warcraft, Diablo, and StarCraft universes with our players."

At BurgerCraft, gamers will be able to choose from a varied menu, eat Blizzard meals live with other members of the gaming community, and try out The Burger Crusade?, Blizzard's highly anticipated restaurant queue system. Among many other exciting meals, the BurgerCraft menu will include:

* The Zerg Rush All-You-Can-Eat Special
* The Scholomance Special (5-person group dinner discount)
* The Molten Core Combo (40-person group special events discount)
* The Paladinner drive-thru special ? grab your food and speed on home in a bubble of joy and comfort
* The Hunger System ? prove your might in the Hunger System by consuming Honorable Meals and racking up Hunger Points; reach the rank of Grand Gourmand and gain access to our special Epic Meals? and the Secret Cow Level, our exclusive VIP lounge,

For full details on the grand opening of BurgerCraft, please stay tuned to the official Blizzard website (www.blizzard.com) for upcoming announcements.

Again, we really like this idea and BurgerCraft is a great name for a restaurant chain. Burgers made by craftsmen serving the most delectable mature Angus ground rib, served on focaccia with dwarf spinach and yellow tomatoes. Bah.

One of the more predictable jibes in 2006 was the emergence of Grand Theft Auto: Chicago, an April Fool that duped many a fansite and blog. The success of the scam was the irresistible fanboy lure of a platform exclusive, the fictional update reporting to be in production for the PlayStation 3.

Well this was the most successful April Fools I've ever done, In roughly 24 hours, over 30,000 unique visitors saw the site, and over 40000 page views, a lot of them realising it was April, but hilariously, some of them didn't realise. It even managed to prompt some foreign GTA fansites to make a whole new section on their website for it!
So how did people know? Well firstly they will have noticed a somewhat poorly chosen font for the word "Chicago". Secondly you needed to be a little more knowledgeable about domain names - I had set gtachicago.com's nameservers to APRIL.GTACHICAGO.COM and FOOLS.GTACHICAGO.COM...

One site claimed they contacted Rockstar to confirm it was a hoax (this was at 2am on a Saturday...I smell a cover-up for embarrassment)...and it was amazing to see how one site analysed every little detail to prove it was false, some people obviously lose their sense of humour at this time of year...

The story is still live on many sites as being a genuine. Good work chaps. Remember to spell check.

The final piece we'll share with you from April 1st 2006 is the Madden 2006 Nude Cheat thought up by our homoerotic at AOL in the United States of America who decided to share with us their very own fantasy of large sweaty naked men:

The team of EA Sports and Madden has long been synonymous with gaming. Fans look forward to new rosters, new players, better graphics (in most cases), new modes and, each year, a new cover athlete destined to fall victim to the 'Madden' Curse.

The AOL community boards lit up on Friday after one post revealed a patch for 'Madden 06' called "The Full Monty Madden" which apparently shows off how well the full motion capture people did their work -- the patch removes each player's outfits.

Reportedly, the patch offers no features or enhancements other than full-on streaking football, besides a few game balancing issues where tackles are a little less brutal and diving to get the football is a little more "reserved."

Industry analysts say that this while this is not a "Hot Coffee" style patch that would allow players to simulate sex, it has been downloaded almost 40,000 times in one day. Oddly, 'Madden' fan sites and other ?Madden? players don't seem to be talking about it or posting any screenshots of the nude patch.

You see the error? A massive gay Hot Gatorade hack would surely have gathered more momentum.

If we've not washed down 100 sleeping pills with a bottle of vodka and swam as far into the sea as possible by this time next year, we'll get right back onto the April Fools happy horse in 12 months time.

DoctorDee 3 Apr 2006 13:41
2/4
Again, we really like this idea and BurgerCraft is a great name for a restaurant chain. Burgers made by craftsmen serving the most delectable mature Angus ground rib, served on focaccia with dwarf spinach and yellow tomatoes. Bah.

All of which can be had, if you live in New Yoik of course, at New York's cunnningly named New York Burger Co.

Their website says "Free Delivery" but they wouldn't honour that promise on a Chicago Burger, Fries and a Chocolate Malt to King St, Wakefield.

i knew there was a reason i liked this damn town... i know what i'm havign for lunch. been meaning to try that place, thanks for the reminder.