To be called Halo Cubed 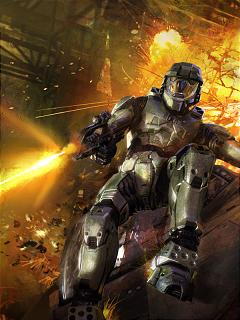 If you have bought an Xbox 360 or are even mildly considering doing so at some point in the future, there is really only one question you want answered: When is Halo 3 coming out?

Well, according to IGN, who is usually fairly reliable on these matters, one anonymous Microsoft source and a second close to the company, have let it slip that Microsoft will be publishing the next Halo game, which apparently is going to be called Halo Cubed, in March 2007.

SPOnG is really getting stuck into the 360 now, with GRAW and Oblivion both blowing us away over the last few weeks. Not to mention our child-like excitement about the forthcoming Rockstar Games Presents Table Tennis. So the news that Halo 3 should be with us within a year's time can only be more reason to go and splash out on a 360, should you not own one yet.

Go on, and if your wife or partner moans just tell them you won it in a raffle or lie about getting an Easter bonus at work or something.

Of course, it?s a shame that Halo Cubed won?t be with us for Christmas, but we think there?s already a good enough bunch of games to see us through untill then. For all the Microsoft haters out there who have been moaning about the lack of a 360 killer app, SPOnG has one thing to say: Play Oblivion and then tell us you are happy to wait untill next March when you get your mitts on a PS3. (Yes, we know it?s out at Xmas, but we also know that this is actually a clever PR lie and that actual real world shops won?t have any till March 2007 at the earliest).

Expect more Halo 3 news from E3 in just over a month?s time, where it?s believed Bungie's game will premiere in video form. The Halo movie is due in summer 2007 and IGN surmises that perhaps the game will leave questions for the movie to answer.

It?s not going to be called Halo Cubed of course. This was our rubbish attempt at an April fool?s gag, seeing as we won?t be bringing you any news tomorrow. Ha ha! Hilarious eh? Watch this space for all news on the next Halo game, whatever it is going to be called. And don?t forget to play hilarious gags like this one on all your mates tomorrow.
Companies: Bungie Microsoft
Games: Halo 3

Fair enough I don't dig everything MS does, but they have to look to develop some more damn games. I wonder if Bungie are bored of making Halo games yet, and if perhaps they'd like to start something fresh. After all not everyone likes fps games.

If I'm not mistaken, those licesnses were owned by Take Two, or something like that, as a result of the Microsoft buyout. Hence Myth III not being from Bungie, for example.

On H3, or the lame "cubed" business, that's good news, although it will make it harder to decide when to buy the 360 vs the rev...

BY DA WAY WEN IS IT OUT?