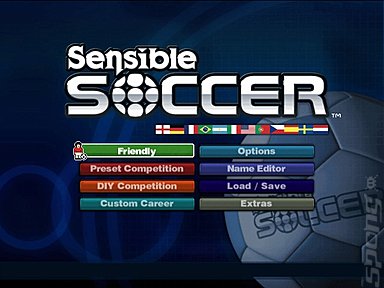 All Images (8) »
Codemasters has just released some new information on the forthcoming remake of the classic footy kickabout, Sensible Soccer.

Sensible Soccer will give players 360-degree control over every move they make. The game will come complete with a load of game modes, boasting an astounding 50 different competitions, including World and European Cup events, plus leagues and cups from all the top European nations.

As well as all of the official tournaments, there are also friendlies and DIY competitions for instant multiplayer kickabouts which inevitably will run late into the night.

Thereís also the Custom Team game mode, designed - according to Codiesí press release which just dropped into our inbox - ìto offer the most comprehensive single-player football gaming experience ever.î This allows you to create, play and upgrade four of your own custom teams - name them, design their kits and choose their style of play - aggressive, workhorse, flair or attacking wide boys.

By winning any of the 45 trophy matches, you will be able to unlock more game features, including new pitch types, such as muddy, and match balls, plus unique player features such as fancy silver boots and the footballerís favourite - the infamous mullet! Go, Chris Waddle! Oh, hang on, isnít that SPOnGís own Mr Walters sporting the haircut of shame?

Sensible Soccer will also feature over 350 International and European club teams, providing over 5,500 players from around the world. The gameís USP's are its insane speed, its spectacular goals with loads of after-touch, and the zoomed-out camera for the best view of the pitch. It will be interesting to see how the game fares against the now well-established Pro Evo and FIFA franchises. While itís offering much more of an arcade kickabout experience, SPOnG is mildly concerned that the game might well be trading too heavily on nostalgia value.

Weíll reserve judgement on that though until we can bring you a full preview on the game, which weíll be doing as soon as we get hold of the code. Sensible Soccer is out this June.
Companies: Codemasters Sensible Software
People: Jon Hare
Games: Sensible Soccer 2006