Told Ya! MegaDrive and Genesis Back Cat for Revolution Confirmed

Iwata adds PC Engine to the mix too 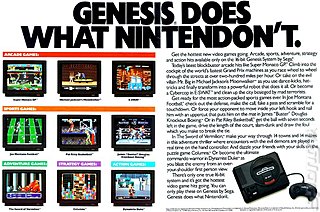 Really! Don't mention the war!
Back in December of last year, SPOnG received word from long-standing and trusted sources close to Nintendo who outlined a deal brokered between the Kyoto giant and Sega to deploy a massive amount of MegaDrive games on the Revolution's Virtual Console. You can read, Sega's Genesis/MegaDrive titles for Nintendo Revolution - "everything ready to go" here.

From the December article:

Speaking to SPOnG today, a source close to Nintendo has stated that Sega will soon announce a massive back catalogue line-up for Nintendo Revolution, with the MegaDrive leading the way on the pay-to-play service.

Our long-term, trusted source told us, under terms of strict anonymity, that Sega is "on the brink of being in a position to announce exactly what it has agreed [with Nintendo]" with the 16-bit console's first-party catalogue to lead the way. Our source was unable to shed light on the possibility of Master System, GameGear, Mega CD, 32X and, dare we say it, Saturn games to feature on Revolution, though an announcement regarding the Genesis range will be made at E3 at the latest.

Our source continued, "Sega essentially has everything ready to go, as the Dreamcast was due to host a selection of downloadable back-catalogue, a program that it can pretty much hand over on a plate. There is some legal involvement with NEC, though I think this is in the process of being ironed out"

Of course, all of this news was confirmed by Nintendo president Satoru Iwata during his keynote address at GDC in San Jose. We imagine the 'legal issues with NEC' referred to is the unexpected announcement that PC Engine/Turbo Grafx 16 will also be available over Revolution Virtual Console.

No games were mentioned, or any other details for that matter, leaving us to wonder about prices, storage, delivery, possible online multiplayer et al, though E3 is likely to shed light on all of this and that's only seven weeks away.

realvictory 24 Mar 2006 10:16
5/11
Well, now Sega are a software company primarily, I can't see what they've got to lose for making their entire back catalogue available online. It doesn't just have to be for the Revolution either.

I wouldn't rule out the Saturn stuff coming later probably... at least, as a SEGA head (and currently wanting less of my consoles to actually plug in) I certainly hope so. With the Virtual Console it already allows me to finally unplug my N64, SNES, Gamecube, Mega Drive... hopefully my Mega CD and 32X too (because the last thing we want is YET ANOTHER Sonic collection with Knuckles Chaotix as its headlining title).

Streets of Rage Get.

Emperor Samoth 24 Mar 2006 12:33
7/11
Damn Sega! Shame on you. My favorite game company has succumbed to their old rival. From now on, I will refer to Sega/Sammy as a once great company.

i think its the concept of "special order" ie they have obviously already covered there past fixed costs,so disregarding the online infrastruture ,100% profit for sega.

however this does not take into consideration legal and tecnical issues,ones that which may hold up,hinder or harm the chances of a full backcatalogue.

PreciousRoi 25 Mar 2006 13:44
9/11
hmmm, always did want to finish Corpse Killers...seemed, scratch that, WAS impossible without a light gun, and the one from Lethal Enforcers didn't work...hate not being able to finish a game...makes me tetchy for years...

Happydwarf 25 Mar 2006 23:50
10/11
Now all we need is for nintendo to conferm a SNK back catalog and the deals done. Please Nintedo you know it would make all the old-school 16bit players happy =D. Viewpoint and toejam and earl on the same console. Woot!!!!!!!

I agree 32x and Saturn stuff could easily come much later on in Revs cycle. Only problem is the supposed 512mb that is supposed to be onoard the Rev. It would be better for Nintendo to giv us a hard drive seeing as there will be all these game formats on one machine.

I'm sure if they dont sort this out, some third party out there might produce a hard drive add on. One things for sure, I'm going to want to store a lot of rom games, much more than 512mb (and that's not even including Rev or GC games saves on it). Lets hope this changes to something larger.