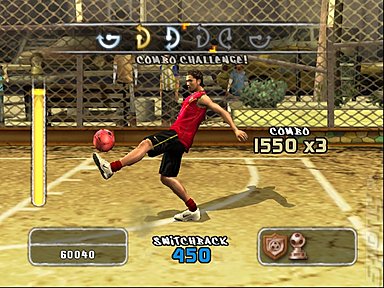 All Images (3) »
It's been a steady sales week over the last week, with three new entries in the top five. FIFA Street 2 becomes über-publisher Electronic Arts' third All Formats number one of 2006. In doing so, EA knocks its latest first-person shooter, BLACK off the top spot down to number two. The Sims 2: Open for Business goes straight in at number three and Lord of the Rings: The Battle for Middle-Earth II in at five.

The overall value of software sales rose by 4% over the week, mainly due to the high number of full-price EA releases. PC and PS2 formats both enjoy their highest sales week of this year, as too does the PSP with sales shooting up 15% in value ? largely due to FIFA Street 2 which leapt straight to the top of the platform's chart.

Codemasters' superlative TOCA Race Driver 3 drops two positions from two to four, and is the only non-EA title in the All Formats top seven. With FIFA 06 at seven and The Sims 2 at eight, EA now has two FIFA titles and two Sims titles in the top ten!

Other new releases include mid-price titles Activision's World Series of Poker in at 16, Dungeons and Dragons: Stormreach from Atari at 18 and at 23 the retro-gem Midway Arcade Treasures: Extended Play (from Midway, obviously).

The big movers this week are both on the slide. As Sony's Shadow of The Colossus tumbles from last week's four to 13, Atari's Marc Ecko's Getting Up: Under Pressure leads the way as it drops to 28 from 15