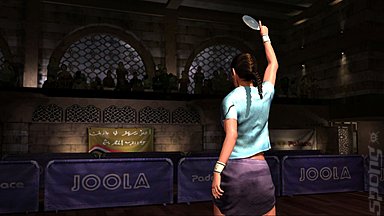 All Images (5) »
Well, you may well have read the news elsewhere that the glorious 'can?t-do-any-wrong' Rockstar Games has just announced its first next-generation title for Xbox 360 this May. Heads have been scratched and noses scrunched in confusion the world over as news leaked out over the weekend about their forthcoming Table Tennis game for the Xbox 360.

Speaking to a Rockstar Games rep earlier today, SPOnG was told that the new title was certainly something of a departure for the company. This, dear reader, is what is commonly known as an understatement.

Table Tennis is being developed by Rockstar San Diego, the creative house behind the highly successful Red Dead Revolver and Midnight Club racing series, and is expected to ship to North American retailers on May 22, 2006 for a MSRP of $39.99 and to European shelves on May 26, 2006 for a price of ?39.99/ Ł29.99.

Yes, that?s right. The GTA geniuses are turning their hands to a bit of ping-pong, and it's a full, proper game and not a mini-game or anything along those lines, as a number of websites have inferred. Plus, they're not doing it by halves either. Check these screens and you have to admit that they do actually look pretty intriguing. With so many sports games-by-numbers on the shelves, perhaps it?s about time for someone to break the mould with a truly fun game about a fun, if somewhat ?minority? sport.

And what better model on which to base the game than table tennis, which in videogame terms is merely an extension of the original Pong?

The news has been received with an understandable amount of confusion and, in some quarters, outright derision. For the creators of such huge, expansive and often controversial titles such as the GTA series, Midnight Club and the forthcoming Bully, to announce a Table Tennis game as their first next gen offering is, it has to be said, slightly strange.

But then Rockstar are always more than happy to shock and it?s quite ironic that perhaps the most shocking thing they have done in 2006 is to announce a game based on the innocuous and, yes, actually when we think about it, hugely cool sport of ping-pong. Expect Ping Pong to be 'the game of the summer', 'the new golf' with its own new lifestyle magazines (Ping Pong Punk?) and everything. OK, perhaps we're getting carried away now. But, all we're saying is, open your minds!

"Our goal was to create a game that is perfectly addictive in its focused simplicity, a game that showcases the true possibilities of a next gen experience, not just in looks but in feel and pace," said Sam Houser, Founder and Executive Producer of Rockstar Games, adding, "We wanted to use the power of the new hardware and the resolution of new televisions to give the game an immediacy, an intensity and a sense of physicality and reality, resulting in a purer, more visceral experience that simply was not possible previously?.It is a distillation of game design philosophy, focusing on removing the traditional areas of compromise inherent in managing size and scope and concentrating the hardware's entire power on one activity, with the aim of doing that better than it's ever been done before."

In fact, we suddenly wish we had a big enough garage so we could dig out that old ping pong table on which we used to while away half of our school summer holidays. Anyone who?s ever spent a serious amount of time with family and friends, either in school holidays or on family vacations, getting stuck into ping pong tournaments, knows the ?just-one-more-go/ best of three! no FIVE!, NO SEVEN!? competitiveness that the game can inspire.

And whilst there have been few memorable table tennis videogames (the execrable Spin Drive Ping Pong, anyone?) who's to say that Rockstar San Diego aren?t about to buck the trend with this one?

SPOnG will be getting a hands-on with the game as soon as we can persuade the good people at Rockstar London to give us a show and tell. Watch this space.
Companies: Rockstar San Diego
People: Sam Houser

thane_jaw 6 Mar 2006 17:20
1/2
the way they talked about using the control pad on the 360 (on ign) seems similar to the idea of using the right analogue total punch control system in fight night round 3. Although using the thumb stick is harder and less successful then solely buttons (you're just asking for an arse kicking if you use it against someone using buttons), I find it a lot more rewarding. If rockstar give you a large degree of control over the paddle (assuming there'll be different manipulation of the thumbstick depending on the shot) it could be really satisfying to use, especially over live.

Plus the competitive pricing is always a bonus!

Hypnotoad 6 Mar 2006 23:38
2/2
FINALLY a game that sounds well suited to the Revolution (which doesn't involve chopping vegetables & making me angry) & Rockstar go and make it their 360 debut.

Me has a shallow feeling that this may be a convenient outlet for all those lawsuits by saying 'Look we don't just make gun slinging gansta crime simulators...anymore'.