Plus exclusive from Grandmaster Flash and more. 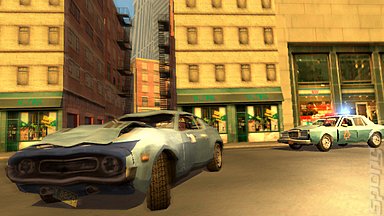 All Images (8) »
SPOnG may still be smarting from the debacle that was Driv3r, but we are becoming increasingly optimistic about the chances of Atari/Reflection?s Driver 4 making the cut. Not least because of the soundtrack, which is shaping up to be a monster, with exclusive-to-the-game tracks having just been announced this morning from hip hop forefathers Public Enemy and Grandmaster Flash.

Now we all know how essential a good soundtrack is to really making a good videogame driving experience, which is why Atari has thrown in an impressive 70 licensed tracks to give players the full-on New York city underground vibe from the two eras featured in Driver: Parallel Lines ? the 1970s and the present day.

The soundtrack is a bit of a mash up, with well known hip hop, punk rock and dance tunes all thrown into the mix, including the aforementioned tracks from Public Enemy and Grandmaster Flash plus a ton of quality licensed material. Suicide, David Bowie, Blondie, Iggy Pop, War, The Temptations, Funkadelic, Marvin Gaye, Parliament, and the Average White Band are all amongst the classics scoring the 1978 era. Arthur Baker, Mylo, Paul Oakenfold, Yeah Yeah Yeahs, The Roots, LCD Soundsystem, Kaiser Chiefs, Secret Machines, and Dead 60's all provide tunes to accompany you as you screech round the New York cityscape of today.

Check out the MP3 player along with some of the video interviews on the Driver: Parallel Lines? official website right here. The site features interviews with hip hop luminaries Grandmaster Flash and Professor Griff from Public Enemy, the legendary New York producer Arthur Baker and zonked-out New York electro-punk veterans Suicide. Check the guy from Suicide and remember kids, drugs are bad!

Cyril Voiron, Marketing Director for Atari Europe had the following to say about the impressive in-game soundtrack: "Driver: Parallel Lines gives players two eras of hard driving in one of the greatest cities on earth, and so the music had to be right. The artists who have produced tracks exclusively for the game barely need an introduction to anyone with a musical bone in their body, and to have secured their services is testament to the potency of the Driver brand.? SPOnG somewhat cynically suspects it is perhaps more a testament to Atari?s marketing spend on the soundtrack.

Let's just hope and pray that Driver: Parallel Lines the game is a return to form for the series and is halfway as good as its soundtrack. The game boasts over 35 diverse missions, no loading times, incredibly realistic driving physics, and a brand new story, which switches between 1978 and 2006. The ?Collector's Edition? of the game will also include an ?added-value? soundtrack CD, which, depending on your taste in music, will double up nicely as a coaster or an indoor frisbee.
Companies: Atari Reflections
Games: Driver: Parallel Lines

They simply do not have the aerodynamics. They have no curve, so they do not extract either lift or stability from the Bernoulli effect.


I'm off to see Secret Machines on April 1, the same day that Town are gonna beat Barnsley and put paid to the Tykes' chances of automatic promotion. Ahem. Back to the music - i've seen SM live and they blow their records away. See them if you can. I've seen Joy Zipper too...(silence).

kid_77 6 Mar 2006 16:16
5/5
micta wrote:
I'm off to see Secret Machines on April 1, the same day that Town are gonna beat Barnsley and put paid to the Tykes' chances of automatic promotion. Ahem. Back to the music - i've seen SM live and they blow their records away. See them if you can. I've seen Joy Zipper too...(silence).
*buys hacksaw*

Haven't been to a concert in ages :(

I think the last one was Beta Band on their farewell tour.