Codemasters to Publish MMO Lord of the Rings 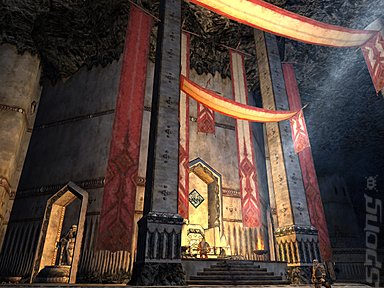 All Images (9) »
Codemasters Online Gaming has just moved up a notch. With one swift announcement, the company has gone from being yet another publisher trying to establish itself in the strange and potentially lucrative world of massively multiplayer online worlds to a major player.

Codemasters has minutes ago announced that it has extended its relationship with Turbine, Inc., a ?premier publisher of online subscription entertainment? (perhaps best remembered for the original Asheron?s Call) and that it has secured the exclusive European publishing and online operational rights to The Lord of the Rings Online: Shadows of Angmar, the first and only MMORPG based on the literary works of JRR Tolkien.

The Lord of the Rings Online: Shadows of Angmar is currently in development at Turbine's studios in Westwood, Mass. and Codemasters Online Gaming will publish and operate the title across Europe, supporting English, French and German language versions.

In the game you can choose to be a human, elf, dwarf or one of those cutesy little hobbits, whilst you get to explore the pastoral Shire, roam the eerie Barrow Downs, visit elegant Rivendell, walk beneath the dark canopy of the Old Forest, adventure to the depths of Moria and discover many other locations fully realised from The Fellowship of the Ring, the first book in Tolkien's trilogy.

To anyone who?s ever been caught up in Tolkien?s fantasy wonderland ? whether through reading the books or through seeing the recent blockbuster movies ? this has got to sound appealing. Even amongst the more cynical and embittered staff here at SPOnG, there is still that memory of childlike wonder when we first read of visiting Tom Bombadil in the Shire or met the original Fellowship in The Prancing Pony in rustic Bree, as we happily rolled our 100-sided dice whilst playing the original Middle Earth Role Playing game (MERP). The memories of being roundly mocked by our peers for being dice-rolling fantasists who preferred elves to girls and were also never very good at team sports is still an issue we are working through with our therapists.

For more information on the game check out the official website right here.

Speaking to a Codies rep this morning, SPOnG was told that the beta testing on the game is likely to start later in 2006. So we guess-timate that the folks at Codemasters Online Gaming should be swimming in real, actual paper money by around, ooh, March 2007.

Rod Cousens, CEO of Codemasters, had the following to say in the announcement release: "The Lord of the Rings is one the most-suited literary pieces of fantasy to translate into a rich and rewarding MMORPG experience and it is immensely pleasing to be extending our relationship with Turbine, Inc to bring its superbly crafted work to Europe."

Whoever said fantasies and daydreaming never paid was clearly wrong. That man is grinning all the way to the bank.