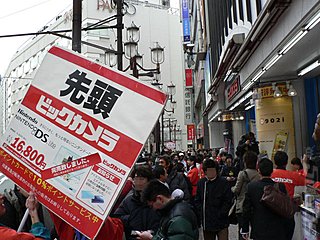 All Images (5) »
The Japanese launch of the Nintendo DS Lite is winding down, seeing the ancient company complete another almost flawless product debut in its native land. The first morning of sales of the redesigned portable machine saw queues that put the launches of the original DS and Sony's PSP in the shade with Akihabara, Tokyo's electronics district, absolutely clogged with eager buyers.

It was a stark contrast to the launch of DS back in December 2004, when the Japanese essentially snubbed the new offering. The snub might have only lasted a day or so, with many immediately cracking in the face of the console's undeniable charm and buying 468,883 units in the first week according to figures from Media Create. The event did fire a warning shot over Nintendo's head, prompting the Kyoto giant to call emergency focus-tests. The main reason consumers shied away was the perception that the design of the DS was generic and cheap.

This problem no longer exists. Reports from Tokyo and other Japanese cities state the Lite is sold out coast to coast. The bad news is that many were disappointed, with only those parking butt on the pavement for 12 hours or more walking away with the beautiful new handheld.

You may have read this report, built around conversations with senior Japanese retail executives last week. It was expected that around 260,000 units would be available on day one ? though many were snapped up by various exporters ready to ship to an equally clamorous western audience. As you'll have read, production issues blighted shipment quotas, with the light and dark blue coloured DS Lite models being pushed back by a week. With only half of the units promised to retailers actually available, shortage concerns with consumers were real, prompting the highly style concious consumers of electronics in Japan to take to the streets, as these pictures courtesy of Impress Game Watch show.

Average store queues at major outlets ran to around 500, a disaster for so many since some stores had as few as little as 100 units available, leaving masses disappointed. As this story was in production, the first DS Lite has hit eBay receiving 12 bids in six hours at time of press.

Export stores look set to cash in on the problems with production, with any available stock likely to fetch a premium as the implications of the production stall sink in. The machine costs 16,800 yen ($140 USD) in Japan yet the export asking price is $170 at the moment, up $10 in the past few hours. It is expected that the next batch of units to become available in Japan will again sell-out immediately, with anyone in Europe or the US likely to be asked $230 for the privilege of DS Lite ownership.

Another point of interest was the diversity of those queuing across Japan this morning for a new Nintendo machine. The ages ranged from 12 year-old children skipping early school to those in their 80s. It's worthy of note that the average age of the desperate DS Lite adopter was around 40.

?Today was a great day for Nintendo. People were rushing around in a state of fever, trying to get hold of those few DS Lites available,? commented Tokyo-based journalist Jonathan Ikeda. ?I don't think Iwata is a prophet, but he was right - the spirit of the Famicom era is returning. For the first time in over a decade, Nintendo again has Japan under its control.?

We'll keep you updated on all things DS Lite as the days tick by.
Companies: Nintendo

majin dboy 2 Mar 2006 14:19
1/2
nice to see ninyendo doing well.
personally,i can wait for a uk launch and depending how money is going at the time i could wait for a price drop.

Joji 2 Mar 2006 22:06
2/2
I think Nintendo will mark the DS lite launch as a success. despite the lack of the other colur units. A week isn't very long to wait for those and I'm sure Nintendo will look at all those sell outs and step up production somehow.

Sure I'd love a new DS Lite, but I don't mind waiting til the import rush dies down a bit. It's more important to me that I can experience the games, be it via an old or new DS.

Nice to see the japanese public getting into the DS fever. Almost feels like a an old school console launch back when Nintendo ruled.

I hope MS are paying close attention, because if they do plan a handheld they might fragment the handheld market. Handhelds are about the games and if they can't see that, then there's the fact that a lot of console games won't work on a handheld console. Halo won't be enough to get MS out of this one IMO. I also think two major handhelds are enough, we don't need another (don't forget we also have GBA SP and GBA Micro too). maybe I just like the way things are with DS and PSP, two's company and three's a crowd.

Well, here's to Nintendo and lets hope those same folk return for more DS Lite and the upcoming Rev launch.