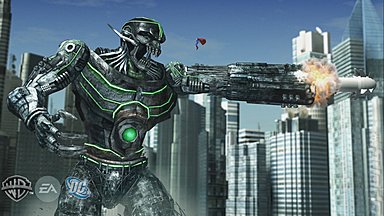 All Images (2) »
Electronic Arts is certainly on something of a high this week. What with its gun-blasting new IP BLACK topping the charts, it seems that the company perhaps has a lot more to offer gamers than mere churn-em-out licensed games and sequels.

Well, with all that in mind, we have a really rather good trailer of Superman Returns, due out this summer. Of course, it would be hard for them to not make a healthy profit with this license-to-print-money DC Comics property. There is also the small matter of Warner Brothers Pictures' Superman Returns, destined to be one of the biggest movies of the year, scheduled for a summer 2006 release on June 30.

But that’s all by the by. What about the game? Of course there have been Superman games before, more than twelve at the last count on SPOnG, but they’ve pretty much all been turkeys. From the look of the trailer, there is an inkling of hope that it might just be a good game. Oh, how we want it to surprise us.

If, like many of us at SPOnG, you are old enough to remember the first time you saw the original Superman at your local fleapit, you will understand the yearning childhood desire, nay need, to be Superman flying through the skies of Metropolis.

Forget Spidey, Batman, The Fantastic Four and all those other pretend superheroes. The Man of Steel was and is the ultimate geek fantasy dream. As the gangling Clark Kent, he is socially inept and clumsy by day. As Superman, he’s both able to pull the lady of his dreams and fly backwards around the earth faster than the speed of light at night. Have that, Batboy!

The game features storylines from both the movie and more than 60 years of comic book content, which sounds promising. The obligatory press release quote comes from Steven Chiang, vice president and studio general manager, EA Tiburon, who says, "We are creating a game that allows players to experience a real sense of flying, and master Superman's unrivaled super hero powers in order to save Metropolis. Only Superman can meet challenges of this scale."

Gerhard Florin, EA's Executive Vice President and General Manager for International Publishing added, "Bringing Superman Returns to life in a game of this magnitude that mixes the comic lore with some movie elements delivers a powerful and emotional gaming experience to consumers."

Download the trailer in QuickTime format (14MB) here or in Windows Media format (11MB) here and see for yourselves, and say a little prayer that EA will do the millions of wannabe Supermen proud with this game.
Companies: Electronic Arts
Games: Superman Returns: The Videogame