The future just got loads weirder. 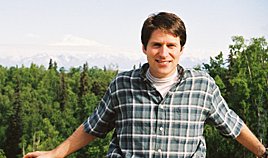 Alex Seropian
Spectrum MediaWorks confirmed that its flagship franchise X Quest will ship as a massively multiplayer online game at the same time Fox Broadcasting debuts the X Quest reality TV series, to be produced by Imagine Television for broadcast in 2007.

So what?s new, you might think? It?s a TV show with a videogame spin-off. Or vice versa. Whatever!

No, X Quest, for those who haven?t heard of the game/show concept before, really does promise to be something wholly and entirely new - a massively multiplayer game that will be simultaneously developed with the reality TV show of the same name, according to the story in the latest issue of The Hollywood Reporter.

Due to launch in 2007, the MMOG and the TV show will intertwine and feed into each other?s worlds ? the game impacting the TV show, and vice-versa.

"Entertainment convergence is something that has been talked about for a long time, but the multiple media distribution pipes are now in place to create properties that can work on multiple levels," said Alex Seropian, co-founder of Spectrum MediaWorks.

Now, before we attempt to try to deconstruct what all this high-falutin? media talk actually means, you may recognise Seropian?s name. He was also the founder of Bungie Studios, the lauded developer of the Halo franchise, and he currently heads Wideload Games, the studio behind Stubbs the Zombie. So lets just say he knows his games.

There are more big hitting Hollywood names involved. The idea for the show came originally from none other than Ron Howard (yes, Richie from Happy Days and uber auteur director of such classics as Ransom, Apollo 13 and A Beautiful Mind) and will be set in the near future, with two teams of seven jumping into a 'space simulator' and taking on a series of challenges over a month-long period.

Players in the game will be able to interact with the reality TV stars from the show, with the best X Quest gamers on board to star in the subsequent seasons of X Quest.

The X Quest ?world? will also be accessible through the Internet and mobile phones, a la more traditional reality shows. As yet there has been no publisher or developer announced for the game.

Aside from sounding a little big like a big budget version of Space Cadets ? the failed reality TV show hosted by Johnny Vaughan in which contestants were tricked into thinking that they were in space - it certainly beats ?Celebrity Big Brother: The Videogame?. We think.
Companies: Bungie
People: Alexander Seropian