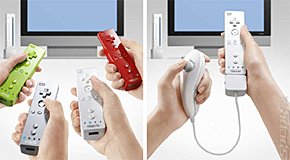 Interweb chatter over the weekend on many a videogame forum centred around comments made by an EA exec in an interview regarding ?touch sensitivity? features on the new Revolution controller.

EA spokesperson, Trudy Muller made the following comments in an interview with website Nintendorevolution.ca regarding the Nintendo Revolution controller: ?The beauty of the new Revolution controller is that the possibilities for new game ideas are limitless. I'm sure that Nintendo already has a number of phenomenal design concepts built around 3D Pointing or Touch Sensitivity for their 1st party games. Our developers are inspired and excited by the new controller's features.? For the rest of the interview just click right here to go to Nintendorevolution.ca.

This has of course sparked off a lot of guessing and theorising about what this ?touch sensitivity? function on the Revolution controller actually means. It?s thought that whatever it is and however it works, this is the final big ?secret? that Nintendo plan to unveil at E3 this year.

Initial thoughts were that the Revolution controller could have a touchscreen panel similar to that of the DS, via which you could move a cursor on your TV screen similar to the way in which you can with the DS stylus.

This seems to SPOnG, to say the least, a bit of a far-fetched flight of fancy.

Another idea is that the controller may well be developed to work with an additional add-on with some kind of touch screen functionality. Again, this just doesn?t seem in any way feasible.

Regarding a special force feedback feature ? the idea of a wireless controller with rumble features is of course nothing new. The 360 controller does it and does it very well indeed. And as one keen-eyed forum poster commented: ?I think this is very likely the "secret" and can be achieved thru 2 gyros that work in unison or against each other to give more feeling than a basic rumble pak could.?

Regarding the somewhat more innovative idea of a ?Sensory Feel Button? ? this is something which, if achieved, really could open up loads of interesting new areas of gameplay and heightened user control. The idea is that the large A button on the Revolution controller, which you will control with your thumb, could offer touch/sensory messages through to the thumb, kind of like a brail-reader, in order to give the user a sense of something moving or flowing or something about to happen and so on.

In essence a feature along these lines could complement the 3D spatial movement feature of the Revolution controller in many ways ? ie you move your controller around until your thumb tells you that you have found/hit something, and so on. It?s certainly one of the more interesting of the many speculative ideas surrounding the big secret around the Revolution controller and one which SPOnG is keen to see and hear more on. Watch this space for updates as soon as we get them.

Greg2k 27 Feb 2006 23:29
2/2
I really doubt this touch sensitivity is more important or revolutionary than the fact that the controller is a magic wand on steroids. If Nintendo is saving something up until E3, it will have to be bigger than this. I don't see how touch sensitivity or better force feedback would be pushed back to an E3 announcement.

And I don't think there'd be any braille-reader stuff on the A button, either; THAT would be a gimmick. There's no real need for us to experience all 5 senses when playing a videogame. Sure, touch will be the next one on the list, but it's no priority as of now because our games revolve around what's being displayed on a screen and what we hear from speakers; that's more than enough in order for us to "find" an object. If and when we decide to leave TV screens, then maybe touch sensitivity will come into play.

But as of now, the only interaction between game and gamer involving touch will be from gamer to game, not the other way around.