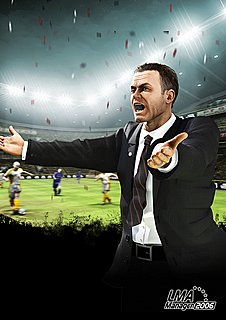 All Images (5) »
For completist fans of Football Management on console, Codemasters has just announced that a downloadable update is now available for LMA Manager.

The update features all the mid-season transfers and latest player stats and is available to download for a mere £2.99 via PlayStation 2 Net and Xbox Live. Once implemented into their game, LMA players will now be able to see Evra and Vidic in the Manchester United squad, Cassano with the Galacticos at Real Madrid, Maniche in the Chelsea midfield and Di Vaio leading the line at Monaco.

Also, PlayStation 2 Net is, so it appears, an online Internet service for people who play online games via their PS2ís. And yes yes, ok Sony, we know that your installed base of online gamers is bigger than that of Xbox Live and so on. But we just can't resist a little dig, because we actually donít personally know anyone who plays on your online service and it's universally agreed that itís a bit rubbish in comparison with Xbox Live.

So just make sure you fix it all up for PlayStation 3 when it comes out this Spring. Which additionally readers is also great news, what with the first day of Spring being next wednesday, as this officially means that we have only just a little over three months at the most to go then until we can get a Jap PS3 on import, according to Sony's 'sticking to our original timeline' line.

Pies in skies aside, for those who really just cant wait to get SEGA/Sports Interactiveís far superior management game ñ the best and the original Football Manager ñ down for a PC, Xbox 360 and PSP release this April, then you can find out more info on Codiesí LMA pretender to the footy management sim throne right here.