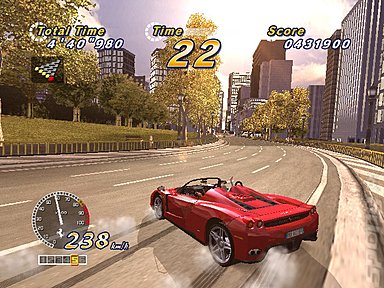 PS2
All Images (14) »
SPOnG paid a visit to the good people of SEGA Europe earlier today and we were treated to, amongst other things, a hands-on with the much-anticipated Outrun 2006: Coast to Coast. We cant really say much more about the other stuff we saw and heard about, suffice to say that 2006 is going to be a major year for the publisher. Read on, SEGA fans!

Outrun 2006: Coast to Coast gathers the best of the Outrun 2 and Outrun SP arcade games and adds on an entirely new mission mode, online options over Internet and LAN for ALL versions (yes, including PSP Internet Wi-Fi play) for up to six players; plus brand new cars and music.

There's also a whole host of entirely new features in the game too, including 'Outrun Miles' which allow you to buy new stuff in the showroom, enhanced 'slipstreaming' whereby you can increase your speed by slyly making use of a leading car's slipstream, and chasing 'rival' Ferraris in the game, which gives you a more regular incentive to push your car just that little bit faster.

All in all it?s shaping up to be pretty much the ultimate Outrun experience. Which means it?s pretty much the ultimate home arcade experience. Its like we're nearly reaching that arcade high we've been looking for all these years. The one which we first experienced all those years ago on the original sit-down Outrun arcade machine in some seedy, smoky arcade in a rainy, northern seaside town, now taken over by heroin and prostitution though still serving good fish and chips.

The basic rules of Outrun are quite easy. Don?t crash and drive dead fast. After that, the rest pretty much falls into place. You also have to remember that Outrun is not in any way a driving simulator (like Gran Turismo for example) but that its an arcade game, and as such is not limited in any way by having to mimic real-world physics. It's all about drifting. Like the real world, just better as drifting is actually really hard to do and usually results in crashing into a roundabout as one SPOnG writer found out recently to his cost.

Check out this batch of online exclusive screens from the PS2 and Xbox versions of the game and read on if you have the slightest interest in what, in SPOnG's opinion, is quite possibly the best arcade racing game ever developed for home console.

Now that?s a major claim, we realise. But after some time playing on both the PSP and the PS2 versions of Outrun 2006: Coast to Coast we just cannot wait to get our hands on the final review code. This playtest was the closest we have ever got to the full-on Outrun Arcade experience and the superb, neon-bright environments whizzing by our windswept barnets had us almost weeping with delight. Plus the PSP port is just sublime. Playing Outrun on the PSP was a very similar experience to playing it on the PS2 - controls and slightly toned down graphics aside.

Perhaps most importantly, especially for hardened Outrun fans, the drift control is so well-executed and so intuitive it makes the game an instant joy to pick up and play. For those of you who might not have played past versions of this (we won?t ask why) here is how you drift. As you approach a sharp corner you release the gas and immediately push down on the brakes. You then quickly steer sharply into the turn and hit the gas again, using the left and right controls to tame the drift of the car. It sounds hard, but its not. Although to do it properly it is. You are just going to have to wait till the end of March to see what we mean.

Drifting is not always the quickest way to tackle a corner, but it sure is the most fun. Essentially until you?ve played Outrun 2006: Coast to Coast and experienced the joy of flinging your car around the many awesome tracks it has to offer, you?re not going to fully understand or experience the pure escapist joy this game has to offer - in spades. Suffice to say that Ridge Racer and its fiddly sliding mechanic is just about to be bumped right off the top of the arcade powersliding hall of fame again by this fresh take on Outrun 2.

Outrun 2006: Coast to Coast also boasts a massive spectrum of content. You can of course, if you so choose, just pick up and play it, getting immediately into a game with no messing about. And this is what we did - jumped straight in, selected our favourite Ferrari (Red Testarossa convertible), set the radio to Magical Sound Shower and hit the road. And first impressions of the game are very good indeed.

Playing the PSP version, we were soon mastering drifting in this diminutive form and marvelling at the great job Sumo Digital has done with this handheld port, keeping the game as faithful to the original arcade experience as we could imagine. It must be said that Sumo has once again showered itself in glory. And by glory we mean the tickertape and confetti kind, not the other kind the Germans like.

The PS2 version, which despite a slightly inferior and fuzzy screen, played as smooth as hell with no frame rate issues or technical glitches to pull it up on (usual for games at preview stage). We were treated to a quick demo of one of the main new features of Outrun 2006: Coast to Coast - whereby the player can save up ?Outrun Miles? as he progress further and further through the game. There is considerable depth to this new version of Outrun. Yes you can pick it up and have a quick five minute blast on it if you like. But SPOnG has a feeling that most players will be spending much longer on the game than this.

?Outrun Miles? are a mixture of air miles and kudos-style points. Essentially, the better you fare in each race you complete, the more Outrun Miles you obtain. These can then be used in the showroom section of the game to buy new cars, music, tracks, goals, colours for cars and other cool stuff. We mentioned that there is a lot of content in the game, but if you want details then here they are. All in there?s 15 different cars, with 13 additional model variations; 30 reverse stages of the 15 Outrun2 and 15 Outrun2 SP tracks; 14 set routes and 21 songs, including remixes of the Richard Jacques classics and two new tracks from Hiro-san, the fella behind the original music.

The 'Outrun Miles' represent the first major improvement in Outrun 2006: Coast to Coast over the previous Xbox version of Outrun2. If you are faced with a really difficult mission in Coast to Coast mode, you can switch to Outrun mode and get a faster car to try the mission out in ? and in this way you will never find yourself hitting that ?brick wall? in the mission mode, when you really feel like you cannot progress any further. This was one of the main gripes players had with the last version, and SEGA/Sumo have clearly taken it on board and fixed it with a very clever and innovative bit of gameplay design. No more broken controllers then, as there?s no longer any need to throw them at the wall in a fit of frustrated rage.

On to the different modes. Coast 2 Coast Mode is the main mission mode, in which you are faced with a number of tasks inspired by the challenges from the arcade outings. There are around 100 missions split into two categories ? the Flagman?s racing missions and the Heart Attack missions, which are given to you by Outrun's trademark busty blondes. Racing missions are, as you would expect, a straightforward race against rivals to finish in 1st place.

The Heart Attack missions are challenges from one of the three luscious ladies. In this gloriously sexist rework, they'll throw hearts in the air when you do their bidding. Although if you disappoint your lady, you?ll end up with a poor rating and a girlfriend with ?a right cob on? as they say in Wakefield. Each of the three bits of skirt is turned on by different things ? Clarissa likes fast thrills, whilst Jennifer likes technique and close control and Holly sets you missions based on ?thinking? challenges. We all know girls like these. We wish.

In the more familiar Outrun mode you race along to hit the checkpoints before your timer runs to zero. And the further and faster you and your girlfriend go, the further you make it down the path you choose from the routes in the well-known treebranch style roadmap. In Heart Attack mode you once more try to meet your girlfriend?s various demands in order to fill up your meter with hearts to pass the tasks. Girls eh? So demanding. You buy them WKD and a kebab and they still want perfect Ferrari drift control before they'll do it.

And finally, in Time Attack mode you get to challenge the course records, competing against the clock or against ghost cars in order to improve upon your best times, and hone your driving techniques.

Another new gameplay mechanic in this version ? as also featured in the arcade Outrun 2 SP ? is that you are awarded higher speeds when you manage to squeeze into the slipstream behind one of the cars in front of you. Also, the other Ferraris in the race are clearly identified as ?Rivals?. You can?t miss this, as you?ll notice that they?ll have a massive ?RIVALS? sign floating above them as they come into view. You of course get extra point each time you manage to edge by one of these blighters.

You save your game settings and progress under your ?license?, which takes us onto our last few comments about the PS2 and PSP versions of the game which we played on today. You can connect the two should you so wish via a USB connection, which basically means you can continue your game on either platform ? earning Outrun miles and unlocking content and simply swapping over your saved license between the two formats. Cool eh? We might have to dig out that dusty PSP after all.

And then SEGA dropped THE BOMBSHELL. Not only will the PSP version support multiplayer Wi-Fi gaming between players in the nearby vicinity. It will also support Wi-Fi Internet play. Yes, you might want to re-read that. Outrun 2006: Coast to Coast will be the second PSP game with online 'infrastructure' gaming. The first was a first party game, Twisted Metal, released last year and the next SOCOM game should also support it, which is also a first-party SCEE offering. Outrun is perhaps as important to PSP as Mario Kart was to the DS.

So, you can play against your mates all over the world on your PSP providing you are logged into a suitable Wi-Fi service. And, OK, while Sony is not providing an extensive network of free Wi-Fi hotspots a la Nintendo, this is Outrun we are talking about. It?s the best arcade racing game SPOnG has ever played on a handheld console. And we are looking forward to tanning our mates all over the world at a powersliding head-to-head whilst sitting in bed, or sitting on the toilet or even (if we can be bothered to pay the inflated wireless tariffs) sipping on a toffee nut latte in our local Starbucks.

SP incidentally, for those who don?t know, stands for ?Special tour? we were informed by the fellas at SEGA. Fair enough - it's their game.