Tackle The First Three, It Will 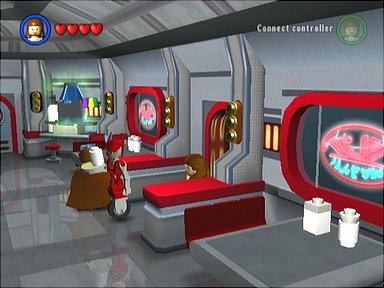 All Images (9) »
LEGO Star Wars was truly one of THE games of 2005. Not only was it the most creative use of a movie license in a videogame that SPOnG has ever seen, it was as playable as a child born out of wedlock. It also sold by the bucket load, with over 3.3 million copies already sold worldwide.

The only minor gripe was that last year?s version of LEGO Star Wars was slightly marred by the fact that it was based on episodes one through to three of the revered movie series, the rubbish The Phantom Menace, the awful Attack of the Clones and the ok/passable Episode III Revenge of the Sith.

However, never fear. Fear leads to anger, anger leads to hate, and hate leads to the Dark Side. And according to Jim Ward, president of LucasArts, we have nothing to fear, as he informs us that: "With LEGO Star Wars II, LucasArts [will] not only set players loose through the original three chapters of the Star Wars Saga, but also to make this feel like the true sequel our fans have been clamouring for."

So you will be, SPOnG assumes, a little bit more than mildly excited by the news that Lego Star Wars II: The Original Trilogy is, unsurprisingly based on the original three movies, Episode IV A New Hope, Episode V The Empire Strikes Back and Episode VI Return of the Jedi ? hereafter referred to as ?The Real Star Wars?.

Lego Star Wars II: The Original Trilogy is to be created by TT Games and developed by Traveller's Tales, and is slated for release later in 2006 across seven platforms - PS2, PSP, Xbox, GameCube, Nintendo DS, GBA and PC CD-ROM. ?May the Force build with you? the press release cleverly japes.

?And much more new to offer, it still has,? the cheeky press release continues. And indeed the game, which is already SPOnG's 'most promising sounding sequel of 2006' does promise the galaxy and more. LEGO Star Wars II follows the Rebel Alliance's battle to dismantle the Galactic Empire and rebuild a galaxy in pieces. From Darth Vader's pursuit of Princess Leia aboard her Blockade Runner to a showdown on the reconstructed Death Star, we are told that the game will include even more of the family-friendly LEGO action, puzzles and humour that earned the original LEGO Star Wars such popularity and acclaim.

An interesting new feature will be debut of ride-able vehicles and creatures - just imagine LEGO Banthas, AT-AT Walkers, Imperial Speeder Bikes and X-Wings - plus you will also have the chance to customize more than 50 new playable characters by mixing and matching body parts, to build your own LEGO Star Wars heroes. For more information on LEGO Star Wars II: The Original Trilogy, check out LucasArt?s website here.