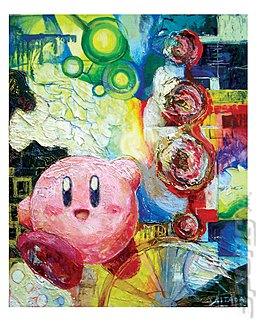 One of SPOnG?s favourite aspects of E3 last year was the stunning Into the Pixel exhibition, which was held in the Concourse Foyer of the cavernous Los Angeles Convention Center.

Most of the entries and art on show last year were of 'kind-of-to-be-expected' scenes of beautifully lit rendered cityscapes at night, which you can check out online here. SPOnG?s favourite by far was this stunning oil painting of Kirby. Aside from the small matters of the Xbox 360, PS3 and Revolution announcements, this was actually one of the 2005 E3 showstoppers for us. Seriously.

Now, we?re no art critics, but we know what we like. And we liked this. We even considered ways of trying to steal it and get it back to the UK. But we?re not international art thieves either, so we gave up on that plan.

Plus, have you seen the size of the burly E3 security bears? Those hired goons are just waiting for some geek to step outta line. SPOnG successfully outwitted them yet again, by doing nothing at all wrong whenever they were staring at us.

Anyways, it seems the exhibition went down well and the organisers of E3 in association with The Academy of Interactive Arts & Sciences and the Prints & Drawings Council of the Los Angeles County Museum of Art (PDC-LACMA) has just announced that the third annual Into the Pixel is now open for submissions.

The deadline for submissions is Friday, March 3, 2006, at 9 a.m. (EST). Into the Pixel 2006 will kick-off with a Gallery Opening and art unveiling reception on Wednesday, May 10, at 5:30PM, with canapes and lashings of white wine (we hope).