Become a movie mogul for free. 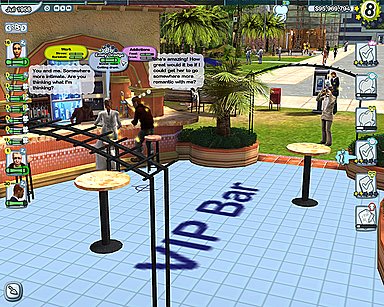 All Images (3) »
Lionhead has just this morning announced that the official 285MB demo of their Tinseltown sim The Movies is available to download for free here.

For any budding movie-makers, or indeed, anyone with an interest in the culture and history of Hollywood, Peter Molyneux's The Movies is a must. In The Movies you can be a movie mogul, a talent spotter or a film director. Or you can be all three.

What?s more, the most successful movies that gamers are creating in the game are now starting to be shown at film festivals all over the world. So you never know. The game could actually lead to you launching your dream movie-making career in actual, real life.

For UK-based wannabe big shots, the Movies community site and the Warrington Film Festival site are now inviting submissions for consideration, to be shown at the Warrington Film Festival on April 7 and 8. The organisers will be whittling the submissions down to the best 12, and these will be revealed to the public at a dedicated showing at the festival.

The festival organisers have placed very few restrictions on competition entries. Films should be no longer than five minutes long, use non-copyrighted music and to be totally original (i.e. not be clear rip-offs of any existing films). Members of The Movies development team will also run a special workshop at the festival to demonstrate how easy it is to create unique films using The Movies.

Mark Webley, Development Director of Lionhead Studios said, "We are very pleased to be a part of the Warrington Film Festival. While any movies uploaded onto our site can be viewed be anyone else, we think there can be no substitute for seeing your movie on the big screen. I am sure that anyone attending the film festival will blown away with the creative talents that The Movies has unearthed".


The downloadable demo provides an in-depth introduction to the Story Mode, where players are guided through how to become the ultimate Hollywood movie mogul by building and managing all aspects of their own movie studio from talent and resources to research and development.
Companies: Lionhead
People: Peter Molyneux
Games: The Movies

Think I might have to purchase a copy of the Movies, once I get a new PC.

It's rare you get such oppurtunities to create something good and get it noticed.

Think I might have to purchase a copy of the Movies, once I get a new PC.

It's rare you get such oppurtunities to create something good and get it noticed.

Hmm... from what I've played of this game I'd have to levy the charge that it appears rather high on presentation and lofty ideas but low on the game side. At least the career mode that is, a fair number of reviews cited the fact that the micromanagement kills this game and the design really hinders you. Sandbox mode is cool, but you can only use the things you've unlocked in career mode - which is an arse to get through.

I guess I'm really rather sceptical about Lionhead products cos I keep getting burned by them (you'd think I'd have learned by now), but this was (at least for me) being something I picked up on a friday, played until 2am getting the hang of everything and then got annoyed with around 3/4 pm saturday because its not really a game, rather a machinima toy.

I guess I'm missing the point and the game's not for me, however I'd suggest you seriously check out the lower end of the reviews on gamerankings.com for some more valid criticisms.

I applaud Lionhead for attempting something new, I just feel that a lot of their exciting new game features get lost behind mediocre game dynamics.