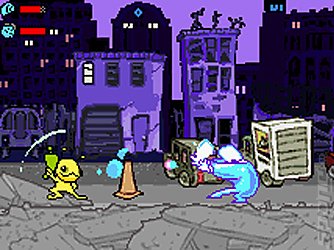 All Images (7) »
Whilst we wouldn?t normally fall for such a bog standard marketing trick as ?buy game, get free T-shirt? here is a publisher offering exactly that offer. And we just fell for it. [URL=http://www.zoodigitalpublishing.com/news-item.php?id=77]Buy Alien Hominid on GBA (out tomorrow) and get a free Alien Hominid T-shirt.[/URL]

Our mates over at Zoo Digital in the People?s Republic of South Yorkshire are offering these snazzy looking Ts to the first 50 people to buy Alien Hominid on the GBA from The ZOO Shop.

SPOnG is itching to get its collective mitts on the GBA version of Alien Hominid, which has had a great critical reception amongst the Nintendo faithful. It?s also proof that there?s life in the old GBA yet, and its not all about Mario Kart DS this and Brain Training DS that.

As the literary geniuses over at Cube Magazine put it: "Like a desert needs rain, like a town needs a name, the GBA needs love and Alien Hominid can provide this in spades."

Plus[URL=http://www.toxicmag.co.uk/] Toxic Magazine likes it a lot[/URL], and we often tend to like the various childish things they recommend. And they give away cool stuff like free slime. If you haven?t got a younger son or nephew for whom you can unashamedly buy Toxic, when it?s actually for yourself, SPOnG pities you.

If you don?t know what Alien Hominid is then, really, where have you been? The game started out as an original, downloadable single-level Flash game, which has now been downloaded over 13 million times and harks back, unashamedly, to the good old days of 2D gameplay. Zoo Digital brought the home console versions of Alien Hominid to the UK last year, and the game was a big hit at SPOnG Towers. Developer The Behemoth proffered a platform shooter that harked back to the good old days, in a Metal Slug/Contra Spirits stylee. The story is that the Alien Hominid crash lands on Earth - outside FBI HQ of all places - and has to fight off the baddies who want to take him to Area 51 for all kinds of unpleasant indignities. To avoid being probed for his alien secrets, the little fella has 13 levels of GBA-based madness and melee to find his spaceship and get outta there. The game, we are assured by the guys at Zoo, is a faithful conversion of artist Dan Paladin's manic comic style for the GBA screen.

This is a obviously a game hand-crafted by people who loved the fast, simple action of old. Go on, buy it, then they?ll have the money to make the DS version. And you might even get a T-shirt if you beat us to it.
Companies: Zoo Digital
Games: Alien Hominid