Codemasters sets out its stall for 2006 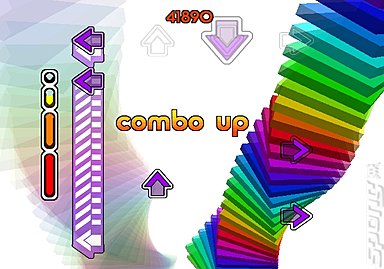 All Images (7) »
SPOnG has just returned from a trip to one of our favourite Britsoft publishers, Codemasters, up in rainy Warwickshire. We are glad to report that their release schedule for 2006 is looking very healthy indeed, with a few surprises still to come and some big announcements to be made over the next few weeks.

SPOnG got a quick chance to have an exclusive peek at not one, but TWO awesome Codies titles scheduled for release in the next couple of months ? the revolutionary dance mat game, Dance Factory, and the luscious looking MMO title, RF Online (see later story for full info on that). Two very different types of game and both something of a departure for Codemasters, yet both are as polished and as accomplished as we have come to expect from the UK software giant.

SPOnG was lucky enough to be the first bunch of journos in the world to actually have a bit of a gawp and a bit of a jiggle around with mind-blowing dance mat game, Dance Factory. Why mind-blowing you ask? Well, simply because you can insert your favourite CD and the game will generate dance moves in time to your favourite tracks. Pure genius.

Before we move on, we should make it clear that SPOnG was a tad concerned, if not overly cynical, when we first heard about the Dance Factory concept. ?It can?t work, surely?? and ?nice gimmick!? and other such phrases were being bandied around the office when the game was first announced late last year.

Well here?s the good news - our ingrained northern cynicism was totally unfounded. It actually works! And not only that, it soon had our Phil shimmying and shaking along to the Kaiser Chiefs, one of those rubbish ?Indie? bands he purports to hate! We think this has to be some kind of proof that Dance Factory has the potential to get anyone with functioning legs up off their sofas and strutting their stuff in front of the telly. Suffice to say when this is released on March 31st this year, it will most likely re-ignite the dance-mat craze and will most certainly be flying off the shelves this Easter.

As to the mind-boggling science behind how it works, SPOnG asked to have it explained in ?layman's terms? (ie. for thicko?s) and here is how it does it; The 'beat recognition process' uses multiple techniques including Spectral Analysis to identify signatures in a scanned CD. This deep analysis means the game can accommodate songs with different time signatures, or even those that change mid-song. The system can cope with music recorded digitally or in analogue, which for those of you under the age of 25 can be summed up as 'music from the olden days'. The game engine makes an intelligent decision to produce dance steps to best complement the music ? having the ability to differentiate a verse from a chorus, amongst loads of other clever stuff.

But you don?t really need to know all that. You just need to know that right now it?s the best dance mat game ever developed and that you should be buying it and playing it... lots! In fact you?ll probably end up playing it so much that you might sick up all that chocolate you guzzle down on Easter Sunday. With this in mind, SPOnG?s main Dance Factory tip would be to not play the game on a light coloured carpet.

Dance Factory also has loads of other genuinely new, clever and non-gimmicky features, including Fitness, Endurance and Recorder modes ? which are pretty much self-explanatory. Fitness and Endurance modes simply mean that your girlfriend will suddenly express an interest in the game. Recorder mode allows you to create your own dance routines and also to share them with friends. There are yet more innovations still to be revealed, the main one of which is Eyetoy play.

Perhaps the cleverest and most bizarre new addition to the gameplay is the introduction of the Creature mode. You wouldn?t have realised this but each of your CDs contains a unique creature, who can now for the first time be unleashed in the world of Dance Factory! A-ha! A cunning, yet cutesy concept. Yet even this gameplay feature genuinely seems to add more depth to the gameplay. A complete Dance Factory review will follow as soon as we get hold of a copy and then manage to get our girlfriends off it.

On our way out, SPOnG also managed to snag an interview with coding legend, Jon Hare (of Sensible Soccer fame) ? so watch out for that one, as we quiz the soccer game superstar all about Codemaster?s forthcoming Sensible Soccer 2006.

Expect more Codies announcements over the coming weeks, including some news about some interesting 'new licenses' that they have planned. However, do not fret, being Codemasters we are assured that these are not going to be marketing-led, cash-in second-rate-movie type licenses, but rather 'licenses which work alongside and fit well with some of our current IP'. Hmmmmm, all intriguing stuff. Watch this space for news as we get it.
Companies: Codemasters
People: Jon Hare
Games: Dance Factory Rising Force Online Sensible Soccer 2006 TOCA Race Driver 3

Joji 19 Jan 2006 01:58
1/4
Looks interesting and I guess I'll check it out. Whether it will replace th likes of DDR though is another thing. Quirky j-pop and euro pop that you'd never really hear are one of the main attractions of dance mat games. Some nice ideas going on in this game though.

Might I suggest you Spong chaps review this game with a decent grade of hard dance mat if possible. Up to what you guys can afford I guess.

micta 19 Jan 2006 17:18
2/4
I'm a really bad dancer - i'll put on Music For Airports by Brian Eno and find a comfortable chair instead
more comments below our sponsor's message

DoctorDee 19 Jan 2006 18:03
4/4
Joji wrote:
Might I suggest you Spong chaps review this game with a decent grade of hard dance mat if possible. Up to what you guys can afford I guess.

You think we pay for this stuff?