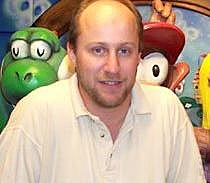 Nintendo of America announced today that Jim Merrick is leaving the company after a 12-year stint in Europe and the US. The news comes as something of a surprise, as Merrick had recently relocated from Europe back to his native US. You can read our full report on his move and enjoy a mildly amusing anecdote about him here.

As to why Merrick left is unknown. Nintendo Europe is issuing statements that side-step reasons, citing the phrase 'other opportunities'. NOA declined to elaborate. Nintendo is known to be something of a political minefield, a source of frustration for employees. It's also well known that NCL in Kyoto can show a lack of understanding to its offices in the west.

Either way, it seems a shame that Merrick has left at this point in his career. He was increasingly popular, with a soaring profile taking on a role as spokesman more akin to that of managing director. His former role at NOE was director of marketing, his role at NOA - now to be unfulfilled - is unknown.