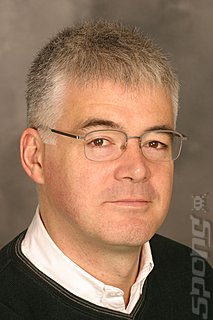 OK, well this week we are expanding our own remit for our GameStarz celebrity gamer interview and including ?senior games industry execs? within our very flabby and open definition of what makes a ?celebrity?.

Whilst Richard Teversham, the new European Director of Marketing and Platform for Xbox, may not be so well known on the telly and in the gossip rags, the decisions he makes do affect the future direction of the games industry. Richard has just taken over the reigns from departing EMEA Marketing boss, Michel Cassius. So for this reason, and in the wake of the much-publicised worldwide launch of Xbox 360 late last year, we decided to fire a few questions his way about all things Xbox.


SPOnG: Hi Richard, firstly, can you tell us a little about yourself and your background and outline in a little bit of detail what your current role is and what your main responsibilities are?

Richard Teversham: I am now the European Director of Marketing and Platform for Xbox and Games, working in the Entertainment and Devices Division in Microsoft. My responsibilities include all aspects of marketing on Xbox 360 and Xbox, including the console, games, accessories and Live, plus the 1st party portfolio for Games for Windows.


SPOnG: What are the initial feelings internally at Microsoft about the 360 launch in Europe?

RT: My feelings are extremely positive. After the dust has cleared from the European launch we see that all preliminary reports indicate it?s a runaway hit.
Thousands of gamers queued up at stores in the 16 European launch countries on the evening of 1st December to be among the first to purchase Xbox 360, resulting in a sell-out situation across the region in its first day at retail. Our early reports also show a huge demand for games and accessories.


SPOnG: The Japanese 360 launch was somewhat muted - how do you aim to crack the notoriously Xbox-shy Japanese market with the 360?

RT: We?ve learned a lot of lessons from our work in Japan. On design, with Xbox 360 we have a sleek, elegant console I.D. that was driven in large part by design teams in Japan. On games, we have committed a great deal of resources to getting tremendous Japanese talent like Hironobu Sakaguchi (Mistwalker), Tetsuya Mizuguchi (Q-Entertainment), Yoshiki Okamoto (Gamer Republic), and companies like, Capcom, Namco, and Tecmo on board to create epic games that will appeal to gamers around the world and especially in the Japanese market.


SPOnG: The response to the launch line up has been fairly so-so in many games mags and on most of the main games websites it seems everybody wanted a launch game which was as good as Halo was first time around would you agree with this?

RT: The launch line up delivers on the AAA exclusive content, key franchises and genres that people want to play, and has something for the broader audience. We are confident that this line up is the best of any console launch, which is backed up by the review scores and the sales. The key sellers across Europe are Perfect Dark Zero, Project Gotham Racing, Call of Duty 2 and Kameo: Elements of Power.


SPOnG: It seems that Xbox has successfully cornered the hardcore gamers market but that PlayStation still has a hold of the mass market. The 360 launch has hardly registered with my nephews who are in their early teens, for example ? all them and their mates want to know about is PS3. With this in mind, how to you aim to grow your market amongst younger gamers and casual gamers?

RT: By offering a broad array of games and entertainment experiences to a diverse audience around the world. Innovations like Xbox Live Arcade, Xbox Live Marketplace, Video Chat, a more inviting design, and intelligent matchmaking will also help to drive more hardcore and casual game playing audiences online; and beyond games, nearly everyone in the world today has a digital camera, an MP3 player or a PC. For those who have these devices, Xbox 360 will offer some revolutionary entertainment experiences.


SPOnG: With regards to pricing/stock shortages etc. - its been said that a large number of Xbox 360s sold in the States so far have gone up on eBay for the lucky customers who got hold of them to make a tidy profit. Can you comment on this?

RT: MS does not provide allocations to online bidding sites as we do not have a direct or indirect retail relationship with these companies. Therefore, MS is not aware of how online bidding companies (e.g. Ebay, Buy.com, etc.,) are making allocations and how they are handling console distributions with customers.


SPOnG: What are you own personal 360 favourites? Do you play at home with your family?

RT: I am currently one level away from completing Call of Duty 2, which has been a completely involving experience. I am now deciding to either play Perfect Dark Zero or Kameo: Elements of Power. The last game my wife and I completed in was Halo in collaborative mode


SPOnG: Xbox Live is the clear market leader when it comes to online console gaming. Its seen by many as the killer feature on 360, and its really hard to see how Sony or Nintendo could offer easier and more comprehensive online play. How do you plan to develop Live in the future especially in terms of bringing the experience to the mass market?

RT: The first driver of people to Live is trying it. If people try Live, they like it and understand how it brings a completely new dimension to gaming. So with Xbox 360 everyone gets a months trial out of the box to try Live Gold. This experience will allow the ?mass market? to experience everything Live has to offer. On top of this Xbox Live on Xbox 360 has a lot of new experiences that will appeal to everyone. Xbox Live Marketplace is a one-stop shop for downloadable content, trailers, classic arcade and card and board games, demos and much more. The voice chat allows you to talk to anyone, anywhere, while doing anything! Gamer profiles include your Gamercards, Reputation, Gamerzones, Gamerscore. This can then be used to match you to compatible gamers making it easier of users getting matched with people you want to be matched with and reduces ?griefing?

Xbox Live also has increased user safety and security such as greatly enhanced parental controls so parents can feel safe in controlling their child?s online experience. If you have an Xbox 360 and you connect to your broadband connection ? everyone will be on Live for free via Xbox live Silver. In addition to this we will be hosting special promotions granting access to the full benefits of Xbox Live Gold for free via programs like free promotional weekends, etc. This is what we are offering today ? however the experiences that Live will offer in the future will continue to excite and engage all gamers.

Well, there we go once more GameStarz fans. With the imminent launch of that PlayStation 3 thingumy this coming Spring (well, perhaps!) SPOnG is still to be convinced that Xbox 360 will successfully capture the elusive ?mass market?. Let us know what you think about this issue and your thoughts on Richard?s comments on the 360 launch above, in the forum below.

config 6 Jan 2006 14:21
2/4
Can't say for sure, but the excesses of Christmas and New Year probably factor into it somewhere.
more comments below our sponsor's message

OptimusP 6 Jan 2006 15:43
4/4
Why can't they all be like Reggie... instead of being boring robots who recite press releases computed in their head... He's better then NOA's George Harrison though... now that's a cyborg robot for sure... god.
Posting of new comments is now locked for this page.