The Worms Turn Back to Classic 2D 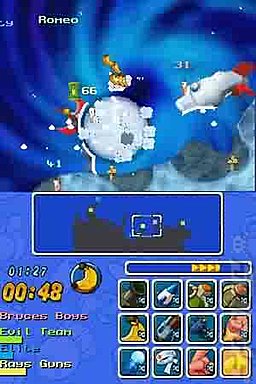 All Images (4) »
THQ has announced a 24th March release date today for the much-anticipated Worms Open Warfare for PSP and DS - the latest in the long-running Worms series of games developed by Team17, SPOnG?s favourite BritSoft coders up the road from us in glorious Ossett.

The game will hit the shelves on the 24th March this year, making use of a 2.5D environment, which, before your brain explodes, simply means 2D foregrounds and 3D backgrounds. This is great news for Worms fans, who generally agree that the experiments Team 17 has made with 3D Worms gameplay in the past - whilst being entertaining and great fun - have not been quite as addictively simple and accessible as classic 2D Worms.

Team 17?s website forums are buzzing with eager Worms fans wanting to know more about Worms Open Warfare and discussing various possible aspects of gameplay. The fans are especially keen to know more about the online multiplayer features of the game.

Well, after all that good news, there is a little bit of quite bad news, we?re afraid. SPOnG spoke briefly to Team 17?s Martyn Brown earlier today who confirmed that Worms Open Warfare will NOT make use of wi-fi internet play. Ah well. Dreams shattered. Hopes faded. However, the game is looking and sounding pretty awesome despite this, and we?ll be sure to bring you our first look as soon as we get our sweaty mitts on a DS ROM. Come on THQ, get it sent!

In the meantime, go to Team 17?s website at http://www.team17.com where you can find a trailer of the PSP version along with more Worms Open Warfare goodness.
Companies: THQ Team17
People: Martyn Brown
Games: Worms: Open Warfare

The writer clearly thought it was okay to simply put the date in the related game listing. Article corrected.

There's a nasty lurgee going around here that must have befuddled the proofing editor's brain. Soz.

crs117 5 Jan 2006 16:57
5/8
What an absolute shame that we will not be able to play worms over the net. That would have been an absolute joy cause its not always easy to find someone else with a ds and copy of worms in the vicinity.

Now all I need is Firaxis to announce Civilization DS. :)

I dont know anyone who bought it, I think it was meant to be okay, although it was turn based, which is a pretty safe bet on DS (though there's currently no sign of Civ). :(
sim city 2000 (which somehow got a GBA release), would also work well on DS, as well as stuff like rollercoaster tycoon et al.

but... no one as far as I know is bringing out any RTS for DS, which is a tad annoying. I thought age of empires II might be the one, but it wasnt to be.