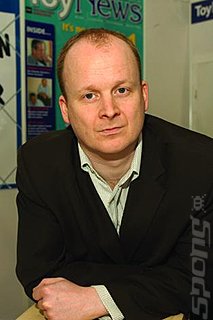 Stuart Dinsey
All Images (7) »
As we rapidly approach the Feast of Consumerism and Coveting that is The Baby Jesus' birthday, SPOnG decided to ask the great and the good of the UK's Games Industry a few questions about the year in videogames. We wanted to know what the marketing execs' and journos' favourite games of 2005 were. We also wanted to know their thoughts on the year that is drawing to a close and to find out a little more about their hopes and fears for the games industry in the 2006th year since the birth of Baby Jesus (this is at least according to the Baby Jesus Magic Trick and Being Excellent to Each Other Fanclub (Earth Branch) and if you haven?t a clue what we?re banging on about you can learn about here).

The answers were in turn stunningly predictable and pleasingly random. Below is a selection from SPOnG?s definitive poll:

1. What was your favourite game of the year and why?

Garry Williams (Business Development Manager, Sold Out/Mastertronic): Phantom Mansion on Mobile - because it is one of the very few good mobile games.

Richard Eddy (Head of Communications, Codemasters): Lego Star Wars ? I just loved how much FUN it was ? plus, more generally for being an idea that shouldn't have worked but did thanks to some wonderful game design.

Nick Gillet (The Guardian): Oddworld: Stranger's Wrath was quirky, subtle and involving. The staggeringly wonderful single player experience should be virtually compulsory for anyone with an Xbox.

Leo Tan (Barrington Harvey PR): A tough one, but really it has to be PGR3. I have the TVR Sagaris in every colour. It's like actual sex with the road, via the medium of amazing cars.

Paul Benjamin (Marketing Manager, Xplosiv): I Loved Warioware DS but God Of War just edges it for me, just a real slick piece of software that really pushed the PS2 to its limit, plus it was great fun and really reminded me why I love games and this industry so much.

Stuart Dinsey (Publisher, MCV): UEFA Champions League, because in the game version Liverpool never spunk their way to the trophy or score goals that don't cross the fucking line!

Stuart Dinsey: Smarties on PS2. Based on confectionery and published by Germans. Bet it's brilliant.

Paul Benjamin: Shadow of Colossus - if it is half as good as Ico it will be the game of the year. Cos despite all the hype and talk of the power of PS3 and 360, its the games that matter.

Steve Hill: The World Cup final, because England will be in it.

Garry Williams: The New Tomb Raider - to see if it carries an Eidos logo or Midway one!!

Nick Gillet: Zelda: Twilight Princess - the unalloyed joy of playing through a Zelda game for the first time is still unmatched in videogames. More is all that matters.

Simon Byron: Elder Scrolls IV: Oblivion, Xbox 360. It's been a long time since I've totally succumbed to an RPG, but this looks like it could rekindle my love of the genre. And of beards.

Leo Tan: Virtua Fighter 5. The sequel to the greatest video game of all time. Monastic training regimes begin in May, I reckon. Maybe a trip to Japan to see it in its native environment. My girlfriend will leave me and I probably won't notice.

Richard Eddy: Tomb Raider - hoping she can be brought back to life...

Paul Benjamin: Roger Bennett - all the best sir, you have served this industry proud.

Richard Eddy: Roger Bennett, director general, ELSPA: For unswerving dedication to presenting the games industry in a hugely positive fashion and introducing superb initiatives that benefits gamers, the industry and people's perception of it. Plus, when an anti-gaming story breaks, for having the balls and a statesman-like approach in high-pressure television interviews to be our champion. Oh, and for being my games-industry 'Dad', of course.

Simon Byron: I would vote for Dave Roberts, Intent Media, because he's industry person of the year 2005 in my eyes.

Nick Gillet: Jack Thompson. If this is the most vociferous nay-sayer gaming has to worry about, 2006 should be a good year.

Garry Williams: Jayne Cavanagh - biggest deal of 2005 and possibly an encore in 2006.

Stuart Dinsey: Glen O'Connell at EA. He got me a signed Frank Lampard shirt.

Steve Hill: Me, because I'm the best.


4. What is your top new year's resolution - work-related or otherwise?

Steve Hill: To win the Word Series Of Poker in Vegas.

Simon Byron: Not to die during the half marathon I've agreed to run in April 2006. I fully expect to see that resolution engraved on my headstone.

Leo Tan: All platinum?s in PGR3.

Paul Benjamin: To invent a channel that plays Lost 24-7, keeping the missus busy so I can play games, watch movies and get home drunk without getting into trouble.

Garry Williams: Not to try to be different, just to be good. To be good is different enough.

Paul Benjamin: Drinking my tenth glass of wine and making a total disaster of the Christmas dinner, followed by a very competitive Singstar competition with mates that could end in violence.

Richard Eddy: The goose will be coming out of the oven, the roasties and Yorkshires will be going in, I'll be sweating about getting it all ready while glugging down more champagne (chef's prerogative).

Garry Williams: Returning swaying from the pub for Christmas Turkey.

Steve Hill: Celebrating the birth of our lord Jesus Christ by gorging on a dead bird.

Merry Christmas one and all and have one on us,

NiktheGreek 22 Dec 2005 21:50
3/5
Industry person of the year should really go to Tomonobu Itagaki for services to slagging off Tekken all the time.

config 23 Dec 2005 08:23
4/5
Simon Byron really is a f**king saint. Not only was he responsible for the dead funny "Byronic Man" column in Develop magazine, but he's going to be helping the homeless when we'll all be helping ourselves to another pile of sprouts <parp>.

And Richard Eddy; Dude, you just got my vote ...

It must be said that in an industry with its share of w****rs (and several other industry's shares too) Byron and Eddy are both stand up guys.