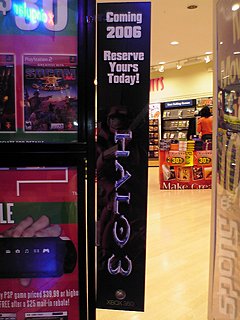 It would appear that Halo 3 might be closer than expected, with several stores, one pictured, opening preorder channels in the US for the still-unannounced 360 update.

As you will have read here, Bungie has been coy when it comes to detailing what it is working on right now. The project is merely referred to as 'next-project' and as you'll see from the aforementioned article, seems well underway.

There is no question that Halo 3 will be released in 2006, though many expect an all-new Bungie game to precede it. This strategy would have the benefit of netting vast sales while fledging an all-new franchise, enabling Microsoft to rollout two games from its jewel first-part studio.

Though the fact that several retailers, often briefed way in advance of the press on release dates for key titles, are taking customer cash for the game, hints that Halo 3 is likely to be on sale in the near future.

We'll update you as soon as we learn more.
Companies: Bungie
Games: Halo 3

Mister Radtastic 22 Dec 2005 21:01
1/2
Its not coming out too soon. You guys aren't that gullible are you? The only reason why they have these pre-order things out now is to try and jump up some more interest into the 360 for the holiday sales. People will be like "OMG Halo 3 is coming out soon for the 360! I better get a 360 now while I can!"

Another reason why they might be doing this is because alot of people, publications have been giving the 360 a bad rap for not having a killer app (now how PDZ, and PGR3 are not killer apps is beyond me), so Microsoft might be trying to remind the casual gamers who will believe this propaganda that the 360 will have some killer apps soon (even if they really wont (soon wise)

Thief 22 Dec 2005 21:11
2/2
I think that the rumors about it coming out on/around the PS3 has more chance of being true than this, because Bill Gates is the one pushing releasing with the PS3, and I'd assume pissing off Bill is a bad idea.

Mister Radtastic wrote:
(even if they really wont (soon wise)

And, in fact, already do, with at the very least PDZ. That game is incredible. Too bad it doesn't have the Halo name so it would get the recognition it deserves.