Puzzle game first of three titles to hit in 2006 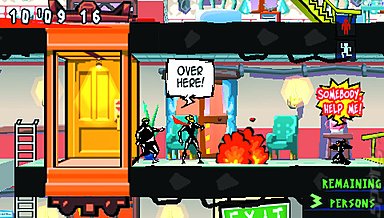 All Images (8) »
Ubisoft has just announced that it has signed an exclusive licensing agreement with Japanese giant Taito. The French publisher will publish and distribute three Taito-developed game titles in 2006, in North American and European territories. The first title to be released by Ubisoft will be the puzzle action game Exit on the Sony PSP, the first screen of which can be seen accompanying this article.

And here is the obligatory press release quotes from Ubisoft:

?Exit?s unique graphics and fluid style make this yet another innovative puzzle game in Ubisoft?s arsenal,? said Jay Cohen, vice president of publishing at Ubisoft. ?Ubisoft is excited to be bringing three of the industry?s most innovative titles to gamers this year.?

In Exit your character is a professional escapologist who can rescue people from just about any situation. Exit players can run, jump, climb onto ledges and climb down ropes and must guide themselves through numerous obstacles while rescuing victims from life-threatening situations such as fires, earthquakes and other disasters in various environments such as buildings, hospitals and subways. The game boasts over 100 different emergencies to rescue people from, as well as additional levels which will also be made available for download. You will also be able to use saved characters to help move heavy objects, master tricky obstacles and so on.

Exit is also going to be, according the the press release blurb, a ?viscerally and aesthetically satisfying experience?. Well, we?re not sure about those clever words, but it sure sounds like it might be a bit of a lark to SPOnG. Expect a first look at Exit very early in the new year.