Blackout claims 'out of context'. 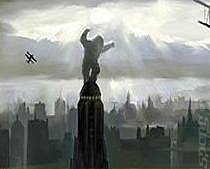 Following on from yesterday's news which saw Ubisoft CEO Yves Guillemot tell the BBC that gamers should avoid the Xbox 360 version of King Kong, the French publisher has today claimed the comments were taken out of context.

According to a report hitting the BBC yesterday, Guillemot warned consumers away from the 360 version of King Kong. The piece's standfirst read, ?Fans wanting to get the best out of the King Kong video game should avoid the version for Microsoft's new Xbox 360, the game's maker Ubisoft has suggested,? and included comment from Guillemot. ?I'm a bit disappointed that we didn't see it when we were developing the game,? he is reported to have said.

Ubisoft, understandably not too happy with the coverage generated by the BBC report, today reacted, claiming it "...stands firmly behind the impeccable quality of the game on all platforms." The publisher continued, "Ubisoft is actively investigating isolated reports of resolution issues on specific plasma screens, which should be easily resolved by adjusting/increasing the settings."
Companies: Ubisoft
Games: Peter Jackson's King Kong: The Official Game of the Movie