Big and bouncy meets hard and steely in next-gen girlfight. 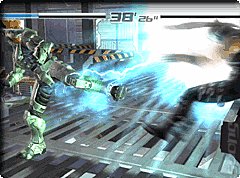 All Images (5) »
As you will be aware, Master Chief, lead protagonist in Bungie's stunning (if slightly overrated) Halo, is a feature character in Tecmo's Dead or Alive 4, currently undergoing final touches in the crucible of the Team Ninja studio.

Well actually, you're aware of something that isn't actually the case. Releasing a full update overnight, Bungie took some time to detail exactly what the deal is with the Halo character in DOA4 and what it was like rubbing its cross-genre pollen on the stamen of Tomonobu Itagaki.

Slugfest is a simple codename, and one we came up with to describe a simple enough idea: Incorporate a character from the Halo universe, in the next iteration of the storied Dead or Alive fighting series.

When Tecmo first approached us with the idea, we were a little taken aback. We've seen a ton of Halo fan projects, everything from Red Vs. Blue to a French side-scrolling shooter, but Bungie had never actually undertaken any kind of game-related expansion of the story, characters or universe. But this was Tomunobu Itagaki and Team Ninja, so we listened to their proposal very carefully and with a very open mind.

Initially, Team Ninja wanted, and asked very politely, for Master Chief. Well, we balked at that. Master Chief is busy, fictionally speaking. We left him at the end of Halo 2, involved in a very large scale galactic conflict with world-ending repercussions. Fictionally speaking, he just wasn't available for fisticuffs.

But we loved the idea of seeing a Spartan fight, unarmed. You have to figure they'd be pretty serious pugilistic contenders right? Half ton of bio-mechanically enhanced armor-clad uber-trained soldiering nightmare? Has to have at least a decent right hook.

So we created Spartan 458 ? Nicole. And she's quite a lady. If you define "lady" as ferociously violent killing machine.

Nicole was born in the year 2531 in the city of New Legaspi on Mars. At six years of age she was abducted by agents of the Office of Naval Intelligence and conscripted into the Spartan II program. The Spartan II program was the UNSC's highly successful military project to augment and hone perfect soldiers.

SPARTAN-458's unit was preparing for a classified mission on Nassau Station when the ONI stealth ship Apocalypso tumbled into real-space ? being carried along in the wake of a freak slipspace anomaly. The anomaly intersected Nassau Station; creating a semi-stable "bubble" in the space/time continuum on its way back to the 21st Century.

For the time being Nicole-458 is trapped in the 21st century; guarding Nassau Station's secrets with all but lethal force (she realizes killing someone in the past could have dire consequences), waiting for the "bubble" to collapse and hopefully returning her to the year 2552.

Here's a list of things Nicole, Spartan 458 is NOT.

In short, she's a fictional means to an end that we gave careful thought, but with a jaunty tip of our hat and a wry wink in the general direction of levity. The way she was implemented into the game, however, was deadly serious.

We can tell you that working with Team Ninja was a dream come true. If you suspect they are detail-obsessed perfectionists, then your suspicions are correct. And they are incredibly responsive. Thanks to our own time bubble ? the trans-pacific lag, - we did most of it by email and FTP server. First we responded to the request with a hearty "Woot!" Which in Japanese, is "Woot-o desu!"

Then the process of supplying Team Ninja with the highest resolution assets we could muster began. We had a huge library of textures, 3D models and other assets. Basically we collected every reference item we could think of from Halo 2 and shipped it to Team Ninja.

Fortunately for the process, we'd actually done something similar before ? not for a game ? but rather for the action figures and giant standees. Although those invoke a similar sense of scale, even the near-life size MC statues don't have quite as much detail as the Team Ninja models. Scratched metal, scuffs, dirt and abrasions all make the DOA Spartan far more graphically rich than any previous iteration.

They use fundamentally different systems from us, so some our 3D models had to be converted once they got to Tokyo, and naturally, the animation for fighting simply didn't exist. We had to describe how we felt a Spartan would fight ? the weight of the armor, the kind of close-quarters, brutal martial arts that a future military might use.

In that last regard, Team Ninja was on exactly the same page. When we got back approval materials (early, playable versions of the game, in varying stages of completion), they had almost nailed it exactly, first time. When Nicole fights, you believe it. Punches are quick and brutal. Kicks are telegraphed, and pack incredible force.

In fact, very little had to be changed in terms of animation, fighting moves or anything else. Most of the alterations and variations that were made to Nicole's fighting style were Team Ninja's own tweaks for balance and fun.

Since the purpose of these approvals was nitpcking, we picked nits. We went back and forth on how reflective the visor should be, ran into some animation issues of our own making ? basically we had to adjust the way Nicole's armor was animated so that fighting moves worked well with the intersection of armor plates.We worked hard to make sure her torso and waist looked female, without necessarily looking feminine. Spartan armor is designed for combat, and makes few allowances for girlish figures.

Although the reworked geometry and many of the textures we supplied were plenty sharp enough for HD, some of our stuff, including the planetscape in the background of Nassau Station, was simply too low resolution for the 360's increased definition. Luckily, we had made a very high resolution future Earth for one of our ad campaigns. Funny how stuff like that suddenly becomes hard to find when you really need it. That sharper Earth was a last minute addition that really made the Nassau level pop.

When you're fighting on Nassau, try knocking your opponent into the Warthog parked in the hangar bay, it has full suspension and glass that will spider if you hit it. That commitment to detail and excellence is exactly why Bungie ? normally shy about this kind of stuff, was so excited and confident about working with Team Ninja.

Team Ninja left a lot up to us, including the dialog for the character ? largely the work of our very own Robt McLees, who very deliberately blended Military-themed bravado with fighting game bombast. THAT was fun. We also had a hand in naming some of the moves, but largely relied on some excellent suggestions by one of Tecmo Japan's American employees. They perfectly caught the tone of fun and fighting we were looking for. They include some amusing jabs ? like the Grunt Punt and The Great Journey (fwd, a and y when facing a stairway or drop).

The big money move for Nicole however, is the plasma stick. Learn it, love it. My personal favorite is a powerful uppercut with a low ceilinged level. Thanks to DOA4's sweet use of onscreen obstacles, THAT results in a very nasty impact.

One "move" is actually a taunt. You can turn on active camo, turning your Spartan into a translucent killing machine. Mr. Itagaki worried that this might affect online gameplay negatively, but the "invisible" Spartan is actually perfectly visible in almost all circumstances and simply looks cool. You can even see the slight reflection of your opponent in the glassy surface.

DOA4 is in a lot of ways, a logical evolution of DOA3, but there's so much new stuff, it's hard to know where to begin. The fact that there are moving objects on screen that can actually injure you is awesome, without being intrusive. The fact that you can not only hop over barriers, but turn that into a powerful attack, is genius. Making the backdrops truly interactive makes DOA4 seem deeper, without sacrificing the fluid simplicity you need from a fighting game. You'll have to play it yourself to find out just how fun, addictive and compelling it is. Of course, we might just be saying that because there's a Spartan in it.

The release date for Dead or Alive 4, the jewel in the crown of the Japanese Xbox 360 launch window, is still something of a mystery, though the game is expected before the year's out ? expect dedicated coverage of it, as soon as we get our grubby mitts on the preview code.
Companies: Bungie Tecmo
Games: Dead or Alive 4

kid_77 15 Dec 2005 17:14
2/4
Bungie wrote:
Initially, Team Ninja wanted, and asked very politely, for Master Chief. Well, we balked at that. Master Chief is busy, fictionally speaking. We left him at the end of Halo 2, involved in a very large scale galactic conflict with world-ending repercussions. Fictionally speaking, he just wasn't available for fisticuffs.
Aren't Bungie being po-faced t**ts here? C'mon, are there enough Halo fans out there to pick holes in this potential disruption to the seamlessness of the Halo universe?

I think it was a bit disrespectful to Team Ninja, and surely there's more in it for Bungei/M$?

majin dboy 16 Dec 2005 00:55
3/4
just want to say thank you to admin at spong.for hosting that questionnaire i posted.got my mark back today 75%-which is a distinction.A big part of the assignment was research,which u helped me complete.
THANKS.