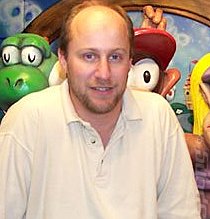 The increasingly popular Jim Merrick will be leaving Nintendo Europe in the coming week, following a three year stint. Merrick will be heading back to his native USA to rejoin Nintendo of America.

The news comes as something of a surprise, as it was thought Merrick would settle in the UK, having slowly but surely taken the reins from the ever-contentious David Gosen.

Merrick?s profile in Europe had been sky-rocketing, with the media-trained and confident head of marketing taking on a increasingly press-focused role. It is unclear whether Merrick will re-take his former position at NOA as head of online strategies, which reminds us of the anecdote promised in our strapline.

We were in Los Angeles for E3 back in 2002 as guests of Nintendo, and one evening, we had been hobnobbing with various Nintendo luminaries and, it must be said, drinking rather a lot of gin. When the evening?s festivities drew to a close, the then-emerging Eiji Aonuma had made every dirty joke a blushing translator was prepared to decode (he eventually resorted to gesture ? the internationally recognised method of talking about women in secret). We hit the elevator, ready for bed.

The aforementioned David Gosen accompanied us, as did another man. We were introduced. ?This is Jim Merrick from NOA,? explained Gosen.

?Hi Jim, what do you do at Nintendo?? we asked. We were interested.

?I?m head of online strategies for the GameCube,? he said.

?Oh?nothing then!?? we innocently quipped, of course making a jibe at the complete lack of online support for Nintendo?s newest home console.

The joke didn?t go down too well. Merrick didn?t respond, instead turning around to face the elevator wall, where he remained for the dozen or so flights before we exited. Oops!

Back to the present: Merrick has been great in his role at NOE, becoming an increasingly popular public figure - his words, though always carefully chosen, carrying a great deal of weight and always taking the fun we occasionally poked at him as well as David ?Robotman? Gosen ever did.