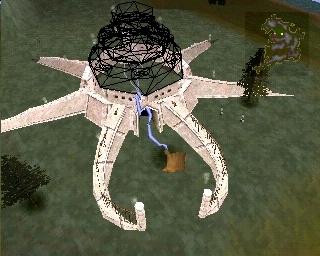 Although Molyneux is famous for having invented the God-game genre with Populous, Black & White is a Demi-God game - unlike any other game that has come before it. Midas Interactive are the publishing the PlayStation version and it is looking sweet.

Black & White was originally intended for the next-generation platforms but there is no reason why it cannot be released on PlayStation. Admittedly, the graphics are being downgraded, but as we all know it’s the gameplay that counts. Usually, PC conversions suffer when they make the transition onto consoles because of the control method. Red Alert is a good example; a joypad cannot replace the smoothness of a mouse, or sophistication of a keyboard. Black & White on the other hand utilises a new simple interface that, we are told, will be just as effective on the PlayStation.

Tony Love, Director of Development at Midas comments: "We are all delighted with what Krisalis have managed to achieve on the PlayStation, they are really pushing the hardware to new limits, and as a result the game looks fantastic. PlayStation owners will be able to enjoy the complete Black and White experience and certainly won't be disappointed with what we have done".

In Black & White you assume the role of an apprentice wizard who performs a miracle for the local villages and that makes you a God in their eyes. You then choose a creature to represent you in game. The gameplay structure is open-ended so it is up to you how to proceed in the game. You can choose to be good or evil depending on your mood. Your creature and the way the villagers respond to you will evolve depending on your actions. Things will get messy when you encounter the other Gods in the game. It’s nice to see an original game in a world full of sequels. Black & White will hit the PlayStation in June.