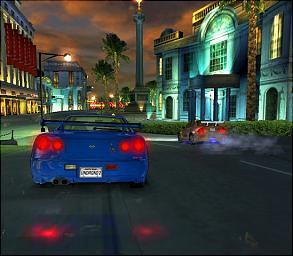 All Images (4) »
Tomorrow the Namco Station in London will host the UK finals of Jolt?s World Cyber Games. There can only be four: four top teams and players, that is, who will go to the finals, to be held in a few weeks time in Singapore.

Sponsored by Samsung and THQ, the contests will be played out on such games as HALO 2, FIFA, Counter Strike Source and Dead or Alive Ultimate. But if you?re not 1337, hardcore or just plain geeky enough to have made it this far in the tournament which has been touring the nation lately, there?s still a chance. As well as the places in the final for the winners of the various different categories, one spectator will also be able to get to Singapore, by posting the fastest lap time on one of two Need For Speed Underground 2 games set up throughout the day.

The lap in question is round the Grandview Station track, so if you?re in the area, it might be worth getting some practice in. Good luck!
Companies: THQ
Games: Need For Speed: Underground 2