Sports Interactive the new guardians of the management genre? 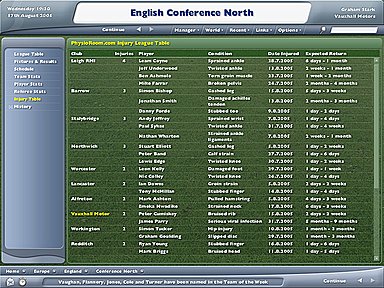 All Images (3) »
As we reported on Tuesday, the UK charts are currently topped by a trio of titles celebrating our beautiful national game. Second only to PES5 is SEGA?s Football Manager, developed by sports management specialists Sports Interactive. Selling a massive 100,000 units in its first weekend on sale, the title has gone on to become the second fastest selling PC game, according to chart compilers ChartTrack.

You may or may not remember that back in 2003 when Championship Manager 4 became the fastest selling PC game of all time. Since those heady days, Eidos? previous king of management sims has lost some of its most ardent fans, with many considering last year?s Football Manager by SI superior to the much-trumpeted CM5. These same fans have turned out in their droves to support this year?s Football Manager. Sports Interactive head Miles Jacobson said the whole team were ?delighted? and SEGA UK chief Alan Pritchard was quick to add:

"All of us at SEGA are thrilled with the first weekend sales of FM 2006, which were up substantially on the same period for the previous version last year. Also, to achieve a No.2 All Formats chart position on Chart-Track at this time of year, on a single format release, is a great achievement. SI has again delivered a fantastic game; this has been backed by a great marketing campaign, with some fantastic support from UK retail."

It certainly is an achievement. The market for football management games is fiercer than ever, with industry behemoth EA also having thrown its hat into the ring a few years back, this year re-branding its management game with the long-held FIFA license. And Konami recently announced plans to create a management version of their famous PES. All this choice can only be good news for management sim players eager to risk everything ? job, friends, marriage ? to try their arm at the subtle art of team building.
Companies: Sports Interactive
People: Alan Pritchard
Games: Football Manager 2006

A huge database like they have you don't build up out of air.