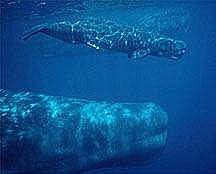 All Images (2) »
As an expanding form of media, games are being explored more and more in terms of what they can offer as tools for promotion. Everyone from the U.S. Army to asthma doctors wants to get in on the action, and now even techno-terrified treehuggers want a slice.

A three student team from Abertay University in Scotland has won a competition to make a game intended to raise awareness about environmental issues.

Minke the Whale won a competition as part of the World Wildlife Fund?s project to educate Scots on the impact their actions have on the global environment. Designed by computer studies students Ben Edwards, Colin Clark and George Denoon, the game was praised by Stewart Graham of Denki who sat on the panel of judges, saying that it was one of the only good ideas that was actually workable.

The idea behind the game is that it tracks the effects of domestic activity on the world?s oceans, as it follows the adventures of its eponymous leviathan hero. Whether it will resemble Ecco the Dolphin or Seaman or something completely different remains to be seen, but we?re very interested to see what the lucky students will come up with.
Companies: Denki