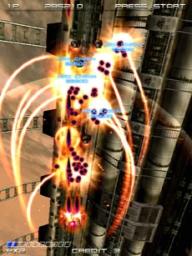 All Images (3) »
You might well be interested to learn that Treasure is thinking over the concept of developing a sequel to the beloved eBay-powering Radiant SilverGun.

Speaking to SPOnG in our brand new interview with Treasure (a full version of which you can read here) company president Masato Maegawa finally broke his silence on studio?s most elusive 2D blaster. "We do not have such a policy of not creating sequels", explained Maegawa. "Our stance is to give top priority to the opinions of each developer, we therefore respected their opinions on creating sequels." He continued, "At this moment, we do not have a specific plan, but since the idea of the evolution of Ikaruga [RS2] to Radiant SilverGun 3 exists, there may be a possibility for it in the future. You?ll have to wait and see!"

Great news for Treasure fans, be they the kind that pretend to have played Radiant SilverGun or not?

Maegawa also went on to clarify Treasure?s current thinking on next-generation hardware development. There is a new game in development for Xbox 360. ?We are developing a game for Xbox360, but we cannot give any details at this time,? he said.

Stick with SPOnG for more interviews with people from companies you pretend to know all about in the future, and remember that you can actually buy a brand new Treasure game in the shape of GunStar Super Heroes, coming out in a few weeks on Game Boy Advance.
Companies: Treasure
Games: GunStar Future Heroes Radiant Silvergun

acidviper 20 Oct 2005 07:54
1/5
This is shoddy reporting. Your ambiguous title makes it look like they are making Radian Silvergun for the 360

schnide 20 Oct 2005 08:32
2/5
Absolutely true - this is a headline squarely from the Daily Mail/Evening Standard/Daily Express school of reporting. Bad Spong!
more comments below our sponsor's message

config 20 Oct 2005 09:45
3/5
How can one simultaneously consider AND confirm the development something?

Captain Cream 29 May 2007 22:27
5/5
A new Radiant Silvergun/Ikaruga, super shmup would be AWESOME!!!
If only I could go back to 1985 and show the world how good shmups are.
They are the only real skill games left. AKA. The Last Starfighter.