And about time too. 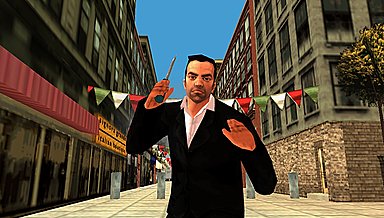 All Images (27) »
Rockstar Games today sent us over an asset disc containing some screenshots from the looming Grand Theft Auto: Liberty City Stories title in the works for PSP.

The publisher has taken the two key elements of the game - namely moving about and killing - and put them under the microscope, explaining how both in-game mechanics will work. As for vehicles, the message seems to be that there?s lots of them. They all come with interesting descriptions such as,

In the late 80?s and early 90?s, getting around Liberty City was a pleasant experience.

You could take a leisurely drive through the seaside Atlantic Quays in your convertible compact, ride your Faggio scooter through the St. Marks Italian District to pick up some special Sicilian spicy sausage from Casa?s Delicatessen, or take one of Liberty City?s famed ferries for a tranquil ride to Staunton Island.

Now in 1998, things are quite different. You can?t step foot in Atlantic Quays without having to avoid being run over by leather-clad bikers on choppers or get your scooter through St. Marks without getting some unwanted extra ventilation from warring crime family shootouts. Even the once peaceful ferry where Liberty City denizens were known to propose to one another and even get married on, is in a state of disarray due to striking workers and a massive citywide infrastructure overhaul.

Rockstar also wants you to know that a new PSP-specific targeting system has been developed by its Leeds and North studios. The R button is used to lock onto targets, utilising a priority over proximity system, automatically focusing on the most dangerous on-screen element rather than the nearest to your character Tony. The lock can then be toggled between targets using left and right D-pad pushes.

A free-aim system is also implemented. Hit the R button, then down on the D-pad to activate this ? designed for slow moving targets or inanimate interactive background items.

We also have a load of snaps of the various weapons you?ll be wielding when the game launches .