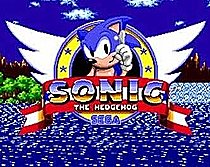 SPOnG takes great pleasure in confirming that tomorrow morning will see two Sonic games fully outlined by Sega, in a global announcement that will detail Sonic Riders and Next-Gen Sonic, the true successor in the massive series.

You can read all about Sonic Riders here, with SPOnG?s forum carrying every single image currently available from the game for your perusal. It also carries the observation that Riders looks a lot like F-Zero AX/GX, the Amusement Vision co-developed racer, so it might actually be more awesome than anything ever. Or rubbish?

Back on topic, You?ll be getting your first glimpse of Next-Gen Sonic tomorrow. We?ve already had a butchers of the game at this year?s E3 show:

Then we were shown a live presentation of next-generation Sonic the Hedgehog. Words alone don?t really do the experience justice. We have not a Booker Prize between us, so please understand that we might be unable to convey the feeling of awe, the actual physical change you go through when being shown a next-generation Sonic game. Perhaps in keeping with our head office location, we can report that it is, indeed, right good.

The demo began on rails, with a first-person perspective of what an educated guess leads us to believe is a revised Green Hill Zone. The first point of note is that the whole game has been created in a fairly realistic way. The trees looked like trees and were of normal size, the sweeping countryside looking more akin to many RTS titles than a Yuji Naka rodent speeder. As things progressed, the camera fell to the side, giving us the first glimpse of Sonic doing what he does best. Running. Very fast. It was at this point that Team SPOnG remembered why it loves Sonic so much. It?s because he?s just so fucking cool. Mario is - quite simply - rubbish next to Sonic. Sonic would kick Mario?s ass so hard?wow. A Mario Vs Sonic deviation. Like being at school in 1992. We digress?

Unsurprisingly, Sonic continued to run, with bursts of speed upping the level of amazement as the fully in-game demo (all of SEGA Japan?s offerings to SPOnG were fully in-game) progressed to a castle in which the ubiquitous Eggman is installed, complete with his omnipresent robot shell. At this point, the Sega representative took over and controlled the battle in real-time, defeating the Chaos Emerald-thieving villain in something of a blur of blue. The best thing about the whole event? The real-time section was controlled via a modified SEGA Saturn pad leading to an undisclosed future platform?

See how excited we were, writing that at 2.00 AM in a hotel business centre. You can read the complete article here.

Right now, we believe that the Xbox 360 will be the exclusive platform for new Sonic, with sources close to Sega outlining that much of the focus of the new game has been on the Microsoft console version. It is almost certain that this version will be on show at next week?s Tokyo Game Show, though reports of a video-only presentation have yet to be verified, with behind-closed-doors hands-on access deemed likely.

So finally the speculation can come to a rest. Though thinking about it, it was pretty much certain that Sega would use the Japanese show as a public debut. Remember, it was on show, being played in real-time by a human back in May. Expect a spring 2006 Xbox 360 date to be announced.

Check back tomorrow for a full update on all things TGS Sonic.
Companies: SEGA Sonic Team

Coxy 8 Sep 2005 14:35
1/8
Xbox 360 the exclusive platform? thats a surprise, i'd have thourght the revolution would have been the most likely console for an exclusive,and it would have been good if it was multi - platform, its a bit of a dissapointment.

Don't worry, exclusivity, as RE4 and GTA showed, means something entirely different now.

Don't worry, exclusivity, as RE4 and GTA showed, means something entirely different now.

Thief 8 Sep 2005 19:25
4/8
Yes and no. The developers may not want to port a Xbox game to a console of inferior hardware. While the Cube isn't that inferior to it, the PS2's hardware is archaic in comparison to the Xbox, so it's entirely possible the developers don't even want to downgrade thier product the small amount it would take to put it on the Cube.

We've got Shadow the Hedgehog on the way soon, Sonic Rush on DS, Sonic Riders and now this other Sonic game. This super Sonic boom is making me feel like I'm back in the 90's again, when Sega pushed out so many Sonic games a year.

What about Streets of Rage, Shinobi, Eswat or perhaps even something new. I keep getting the impression Sega Sammy aren't even sure what games we wanna play. They seem disjointed somewhat when they say we we want more western product. While this maybe true we also like a dose of cultural japanese weirdness like Chu Chu Rocket, Samba De Amigo or Space Channel 5. To get less of it would be a crying shame.

Sonic is good but too much exposure could leave him under rapidly screeching truck wheels with a trail of ketchup.

but GTA and RE4 are niot sega games... sega exlusive stay exclusive... not xbox exclusives... VF4... sonic adventure (unless you count their previous aperances on the DC) shinobi... and anythign else sega has made... the only time a sega game sees multipel systems is when they plan it that way... i.e. phanatsy star and the newest sonic game (whose name escapes me at this moment)

We only had info on the 360 version. I wasn't going to commit to a PS3 version as I had no info on it. Just letting you know where we were up to with our investigations. I believe that the 360 will be the only version actually seen for some time. Any claims that the PlayStation 3 version is anything more than vapourware will be claims and nothing more for now.