DS only for true classic series. 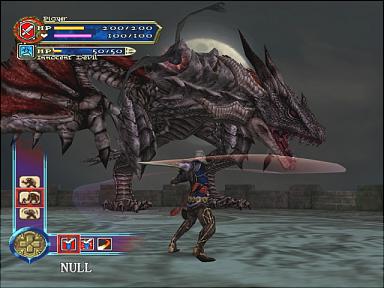 It has come to light that the PSP will not see a two-dimensional Castlevania game, with only fashionable 'modern 3D' titles being offered for Sony?s slab of portable sexiness.

Speaking in an interview bagged by Gamasutra, Castlevania series stalwart Koji Igarashi kiboshed hopes of a return to classic form for the vampire action platformer on anything but Nintendo portables.

?To tell the truth, I don't think it's even that 2D is only possible on handhelds, but more that it's only possible on DS,? said Igarashi-san. ?Personally speaking, I'd jump at any chance to develop a 2D game for any console, or even the PSP, but those chances are getting fewer and fewer. I feel like the DS is the last fortress of 2D gaming. So if we can get a younger audience with this DS 2D game, and prove to them that 2D gaming is worthwhile and fun, maybe then we can increase the market for that type of game.?

However, there is hope, in the form of a comically Japanese impassioned plea!

?I'd like to ask any gamer that cares about this to educate their children about 2D games, and maybe together we can build a bright future for this type of gameplay.?

You see!? It?s not only us and a few disillusioned forum users that believe two-dimensional gaming is not only the past, but the future. It?s important people with proper jobs in the games industry!

Back on point, it is a shame that Castlevania was forced into the world of 3D. The series to date simply hasn?t worked, with playing fields lacking the depth of content required to cut it in such a tight market filled with quality action-platformers. The latest 3D offering shown at E3 was met with blanket disinterest, so perhaps Konami?s comments will be amongst the first to convince Sony?s product submission department that two-dimensional gaming can be as commercially viable as it is enjoyable.
Companies: Konami
People: Koji Igarashi
Games: Castlevania Castlevania: Curse of Darkness Castlevania: Dawn of Sorrow

Igarashi should put a extra in their 3D castlevania game for the PSP, add a classic 2D Castlevania as a extra and do a market survey that will probably tell that people bought the game for the 2D extra (the 3D games range from crap to a bit ok).

soanso 16 Aug 2005 11:59
2/8
I'd love o see more 2d games now. Think how good they could be with the technology that is around now (and remembe how good some of them were without that).
There seems to be a lot of remakes coming out on PSP too. So it's ok to bring out OLD 3d games but not new 2d games.
Good Stuff Sony!!

Philip Wesley 16 Aug 2005 12:44
3/8
OptimusP wrote:
Igarashi should put a extra in their 3D castlevania game for the PSP, add a classic 2D Castlevania as a extra and do a market survey that will probably tell that people bought the game for the 2D extra (the 3D games range from crap to a bit ok).

Or you can pay $9.95 to $14.95 at some stores and just buy Castlevania 1 on the GBA. Or do what I did -not that I am in anyway condoning this- and buy a GBA Movie Player for $24.95 and put Castlevania 2 NES on it. Forget the PSP, I'm all about playing good old Castlevania games on a screen the size of an iPod Photo screen when the Micro comes out. Personally, it would be nice if someone ported Symphony of the Night to the GBA. Cut out the bad voice acting and simplify the controls a little and it would be fine. I mean, the Game.Com got SoTN, and the GBA is a much more capable system.

Joji 16 Aug 2005 14:06
4/8
I think it's nice of Konami to come out and say that there's a problem with the series. Ever since Castlevania first went 3D on the N64 both games suffered and lost something in the transition right up to the present day.

Sony will be the death of gaming because they've only become interested in profit more than games. 2D gaming needs to be preserved, for it is the seed from which this industry grew in the first place. It would be totally disrespectful to kick 2D in the teeth and I'm glad Nintendo and now Konami have realised this.

After years of gamers downloading roms, Nintendo are set to work with that, because it's obviously a service we want, question is will Sony do the same for PSP and is that why they have gotten tough on PSP homebrew? Time will tell.

Well, at least my DS has some nice Castlevania love on the way soon.

Philip Wesley 16 Aug 2005 15:26
5/8
2D games are one of the reasons that they will only take my Game Boy once they pry it from my cold, dead fingers. I think that the statements in the article display something that makes me respect Konami more than I already do. It also backs up my belief that people who develop for portables, are better than people who develop exclusively for consoles. I think it has to do with the developers on the systems. A lot of the people who develop games or work on games for the GBA and DS are hardcore fanatics, or become that way.

The handheld world has a lot of limitations, if you are working on the GBA, you have a lot less to work with than if you were developing on the Xbox or Game Cube. You have to exert more effort to get what you want. Some developers will get lazy and just throw stuff out there. While this may sell decently, it won't get you hired back. It's harder to work with handhelds like the DS and the GBA, but the teams that work on them are notably smaller than the legions of people working on a console game, so less distracting input is placed into a GBA/DS game. It's more personal. The budget and time constraints are smaller too.

I think the problem with the PSP is that it gives portable teams more to work with and thus softens their edge to the point of making sharp developers dull.

NaKAhi70 8 May 2008 21:31
6/8
I have nothing against 2d gamesMyI first ever games played were mario, megaman and castlevania on the GB, but I do believe that some games are hard to bring to a 2d gameplay and with the increase in 3d games its going to be hard to sell it off.
Though such games as Megaman I thought worked well with PSP as it still had a cool 3d effect to it and yet was still in the classical 2d.
I also happen to own the PS2 castlevania and I actually like it but I dont believe 2d castlevania is just as good

what about locoroco, and what about patapon, they are both BY sony, for the psp, and they are in 2D.

and they re brilliant, oh yes.

rich 11 Jul 2008 12:52
8/8
ill tell ya ive gotten so fed up with both castlevania and metroid going 3d i absolutley refuse to buy a ps3 xbox 360 or any new nintendo. i stopped at ps2 and was so dissapoited that one of my favotite games went to 3d that i went back to snes and ps1 games. they are so much more fun to play. dont let 2d games die they always have been and always will be the best. symphony of the night for ps1 was a masterpiece. ive played that game more times than any other. keep the 2d games alive for all consoles so what if ps3 or xbox 360 can handle much more than a 2d. just make the 2d more beautifull than ever before.
Posting of new comments is now locked for this page.