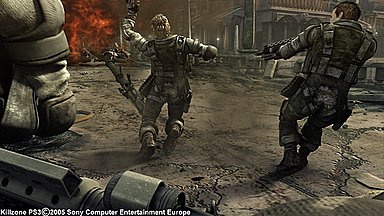 Killzone 2
All Images (3) »
Yesterday we brought you news of more unconfirmed rumours regarding Sony?s forthcoming PS3 console. While it?s anyone?s guess as to how official they are, they have a ring of truth about them if only because they fall into line with SCEI?s ongoing policy of stealth-taxing customers with compulsory peripheral purchases. But there?s much more heartening news today, regarding the PS3?s much vaunted Blu-Ray disc format.

You?ll be aware that these fancy new discs can hold something like five or six times the amount of data that those oh-so passť DVDs can manage, and that the wait for this brand new technology is the main reason that the PS3 will go on sale at least a season later than the Xbox 360, which will be equipped with 'old fashioned' DVD drives. When new drives are released, the speed they run at is referred to as 1x. As the technology advances, it goes up to two times the speed (2x) and then four times (4x) and so on and so on. It was previously assumed that the PS3 would be released only in time to be equipped with a first generation 1x Blu-Ray disc drive. But 2x drives may be available as early as October, and 4x not too long after that, meaning that the PS3 drives could be twice or even four times as fast.

In terms of games, the area that players would benefit from most would be in shortened load times. Of course, the PS3 is already costing Sony a packet to manufacture, and it will already be selling the machine at a loss, so there?s every chance it will stick with the bog standard Blu-Ray drives. And it may even be that Sony already has contracts with suppliers to use these drives.

So, unconfirmed rumours, but rumours all the same, and just how exciting do prospective PS3 owners find these titbits? Be sure to let us know in the forums.

If Loading time are fixed, i can wait till winter 06. cause imagine the huge information of a PS3 game loaded in a normal 1x speed; it would take time.

If Loading time are fixed, i can wait till winter 06. cause imagine the huge information of a PS3 game loaded in a normal 1x speed; it would take time.

tyrion 3 Aug 2005 17:55
4/5
claudioalex wrote:
Thats good to know,
then loading problems no more on next generation.
Good, I bloody well hope so. Actually I'd prefer to see no loading times at all, well maybe a bit to start.

Has anybody else here played Primal? The load times were well hidden in that game, the environment was streamed as you progressed. There was a brief delay if you separated the characters and switched between them. Also there was a small delay when teleporting, but that was covered by an animation.

I know streaming has been done before, Soul Reaver for example had it, but before there were always obvious door animations or winding passageways to hide it. In Primal a lot of the environments were large outdoors type places.