Bondage, Rape and Murder ? Must be a New Videogame 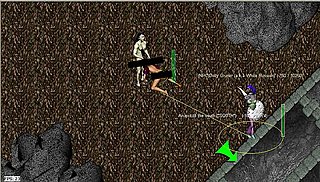 All Images (5) »
Given the current political climate pissing rain on the games industry, it would seem to SPOnG like the perfect time to highlight this new MMORPG. It?s called Sociolotron. Sound innocuous enough, doesn?t it? Like, it could be an experiment in interaction commissioned by an America science institute or something?

Well it?s not. It?s, from what we can tell, like Everquest, just rubbish and about really dark sexual practices. Now, we?re not to make comments about the sort of people who play MMORPG games. mainly because we?re shit scared of them. They are all clearly bonkers, though we are thankful they have something else to do that isn?t eating pizza and buying knives from cable infomercials.

However, Sociolotron is something of a bridge too far. The game features heavy bondage, murder...rape even. Here?s a few excerpts from the games site:

This is one of the most challenging aspects of the game. In short, we set out to simulate a complete body with all activities that could influence the sexual stimulation, including a simulation of certain brain functions which react to stimulation and would in turn influence the body. This way we have a real working system that transmits stimulation from the body parts (mainly genitals) to the brain where the stimulation is combined with various settings of the brain and send out again as bodily reactions. For example the stimulation of a penis can raise the arousal level in the brain so much that the penis would eventually become erect and is ready for a penetration action. Further stimulation can trigger an orgasm, depending on the character's ability to hold back an orgasm (which can be changed) which in turns starts a sperm ejaculation which then could impregnate the partner. You get the idea.

The whole system is very sophisticated and contains much more than outlined here (see Urges below) and is very important to you during the game. There are also various postures your character can obtain and various forms of penetrations. We can not go into greater detail here, but the online help function in the game explains in detail what you can do and how to use the features.

And of course, bondage and torture:

The system also provides a simple bondage system. Hand and wrist cuffs are simply cloths that can be locked and only be opened by characters who have the right key or who have a high stealing skill. A character with arm bondage can not perform most actions as they involve hands. A character with leg bondage can not walk. There is also a gag which prevents the character from talking in the chat window. Characters can be held and led around, especially when they are in bondage, so it is for example possible to walk hand in hand, but also to lead a character on all fours on a leash.

A torture action is best be performed on a character in bondage although this is no requirement. Torture is nothing else but an attack with a melee weapon (or without any weapon) where you declare at the time of the attack that you only want to inflict minimal damage. The system will then inflict only the lowest possible damage per hit, but each hit raises the pain level of the character. When the pain level reaches a certain value there is a chance, that the tortured character confesses to a crime that he committed and for which a regular investigation may be difficult or lengthy (see Justice) so that you can use this evidence now. This is the easier, the higher the sado skill of the torturer is, On the other hand, a high maso value of the victim makes this more difficult. These two skills can therefore be very important when it comes to information gathering which in turn can be very important in gaining political influence (see Government) or personal power.

And that about sums things up so far. In fairness, the game has been put together by amateurs and the scope of what they have set out to achieve is impressive. We have requested access to the servers and an interview with the makers of the game, and who knows, perhaps in the coming (!) days we?ll be able to bring you a hands-on (! again) report on what it?s like to have rough cybersex with a lonely 47 year-old German man who likes to pretend to be a PVC-clad black woman. Or something.

As ever, let us know your thoughts below.