For the first time ever, consoles are demonstrating the power required to run these graphically intensive PC games. 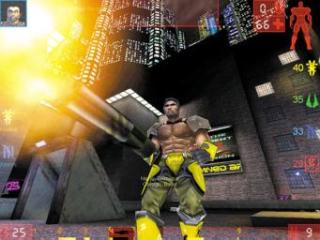 The PC has typically been the home of first-person shooters but that situation is currently changing. Traditionally first-person shooters are played with a keyboard-mouse configuration, a control method that has been sorely missing from the console scene. Now, with the arrival of the Dreamcast and PlayStation 2, the genre is seeing a welcome influx of games and peripherals.

Massively successful and wonderfully playable games like Quake 3, Half-Life and Unreal Tournament have made or will be making their way into your living room. These are action packed, fast thinking, strategic games that can be fiercely competitive. If you have plans to acquire an Xbox on release and you are a fan of the FPS genre, then we have some good news for you. The Xbox is going to be a welcome home to the genre, especially considering its network and hard drive capabilities.

Epic?s vice president, Mark Rein has stated that his valued employee has jumped the gun with his statement. It is often typical for companies to deny all information until they are ready to release it. We are confident that Epic will bring their quality titles to the Xbox, it?s just a matter of time before we know exactly which ones. As soon as we know, you?ll know.
Companies: Epic Megagames
Games: Unreal Tournament: Game Of The Year Edition