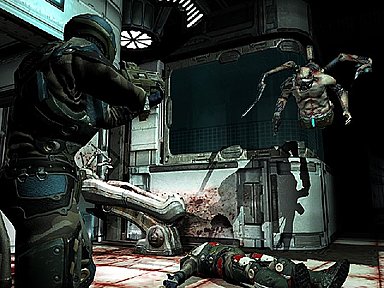 Just before the close of E3 2005, SPOnG was lucky enough to wave the media badges in the faces of id?s PR guys and head off the last group of 'Exhibit only' pass holders waiting for a private showing of the real time demo of Quake 4. The demo we witnessed was running on a top o? the line Intel system with an nVidia 6800 handling the beautification. Even running at 1080, the game was already holding a steady frame rate with barely any noticeable slow-down. The texture resolution did seem a little lower than one might expect, though considering the folks at Raven haven?t even announced a release year, it's relatively safe to assume things will be smoothed out in the final code. Little graphical quibbles aside, the game did look sufficiently gorgeous. While the appearance of the game is very similar in structural and character design to Doom 3, there are a great deal more characters and open areas than anything seen in id?s last offering.

The segments the team at id chose were obviously meant to show off the graphical prowess of Q4 and give attendees a feel of the more cinematic route the designers are taking, while introducing viewers to the deeper level of character development and the main plot twist that really sets up the entire game. As such, there was little in the way of gameplay and no HUD was present. As the tiny theatre went dark, the unmistakable Quake logo faded into view and the tiny crowd of 15 couldn?t help but emit a murmur of excitement. Then, it begins. The scene fades in, first person view of the inside of a dropship, complete with pre-battle banter, through which your character's name, a first for the series, is revealed. As the pre-battle jitters cause some bickering between your comrades, the commanding officer pops in to steady and brief the crew. Apparently someone has managed to take out what the humans had previously believed was the nerve centre of the Borg-like army. However upon doing so, the Strogg continued to function. As a newly recruited member of the elite Rhino squad, you and your company are charged with infiltrating the Strogg and destroying the 'nexus' which is now believed to be the true centre of the enemy?s consciousness. Things, however, do not go as planned?though you had already guessed that, right?

During the intended sneak attack, your team is ambushed, and you are captured. It is apparent the Strogg were anticipating the strike and were awaiting the arrival. Once in captivity, any thoughts of a miraculous last minute rescue quickly begin to disappear. In a simultaneously genius and twisted move, you regain consciousness, strapped to a semi-upright gurney of the future. Just ahead of you is one of your fellow squadmates in a forebodingly similar position, but always one step ahead. It is here - strapped to a human conveyor - that one of the most unsettling scenes in video game history is delivered. As you slowly regain your vision you witness a series of mechanical devices reach out towards your captive compatriot ahead of you. This is followed immediately by a blood-curding yell that will likely bring the hairs on your neck to full attention. It is then, you realise, you are next! Station after station, your circumstance becomes more and more dire. First, just barely visible at the bottom of your field of vision, a needle the size of the shaft of a golf club is plunged square into your chest. Then as quickly as it was inserted, out it goes, trailing behind a mix of forcibly removed tissue and blood. Next, your legs are removed, cauterised and replaced with the cold steel of the Strogg. More and more of your human form is ripped away and replaced until you more closely resemble a side of beef in a slaughterhouse than a man, your skin stretched and pulled around metallic rivets, and once versatile limbs twisted into implements of nothing but death. After your transformation nears completion, you begin to draw near the final step, the activation of your neural implant. It is in this moment, of ultimate desperation, when the idea of escape has all but left your mind, that the cavalry chooses to arrive. From the green liquid tube that acts as your most recent transport, you see your team blow open the doors, quickly accost the few guards around, and release you from your amniotic prison.

It is in this way the missing link is found, the key to defeating the unstoppable horde. You have all the strength and speed and computer interface abilities of a Strogg and maintain your human intelligence and intentions.

id has taken comments from its fans to heart and seem to really be trying to make a game more in line with today?s vision of a first person shooter. Besides having a much more in-depth and emotionally involved storyline, you will be accompanied at times by a squad of several different reoccurring characters. Not just the dime a dozen marines found in the likes of Halo, but a select group of well-developed characters who will all play different roles in your journey to the eventual defeat of the Strogg.

No multiplayer action was shown, but we were assured it would be in there, however rather than reinventing sliced bread, id plan on a faithful recreation of Quake 3-style deathmatch. No vehicles will be included and the only the most basic 'capture the flag' game types will be added on the rocket-filled journey to the future of online fragging. In regards to maps, some old favourites will definitely be given the '1.21 Gigawatts' required to bring them into the forthcoming Xbox 360 and PC tandem assault.

We here at SPOnG are hopeful the two platforms will play nicely over the net, however the controller users of the world might not appreciate such a crippling disadvantage. Stay tuned to SPOnG for all your Quake 4 news and don?t forget to tell us what you think in the forum below.
Companies: id Software
Games: Quake IV

You're right about it being unsettling. Horrifyingly gruesome, I'd have said.