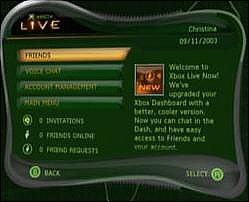 Along with yesterday?s news regarding Microsoft?s struggle to keep a lid on its upcoming Xbox 360 console we promised you an excerpt from the Xbox Live video presentation to be shown at this year?s E3.

Although the piece doesn?t explain exactly how the Xbox Live service will be upgraded, it does illustrate Microsoft?s commitment to the program and reveals one key fact ? perhaps one of the biggest changes in videogaming ever.

The whole point of the presentation is to explain how human interaction will be able to replace AI in some games. Even in single-player modes, other Xbox Live users will have the option to interact within the games of others to some extent. The system will manage skill levels and the option to have human interaction within single-player gaming will be just that ? an option.

It's a universal truth that you can't ever get smarter than your enemy. ok, not your enemy, What's the word? Your rival. It's the thing in front of you - the person, the problem, sometimes the game. It's the brick wall. It's there to drag you, kicking and screaming, baby like, into consciousness. It's the slap when you're born that nobody is ever supposed to remember. Cold water on your face, you know?

That's why I don't want to play the game anymore. And I don't want it to just play me like I'm person A-slot B, the same as the next guy, the next finger on that button, cause I'm not. I want to play the best of the best and I don't care where they are - If I can get to them I will. This is war and I don't want to go to war against a machine. It's like in school. I want you to be more cooperative now, I want you to work with the rest of the class, do your assignments with the group. Choose the slow guy for your team-for your group.

I'm not about to let the box make the call for me. And I need you to stand back and watch this, because if you let me make the rules, let me choose my team from anywhere and let me play up like I know I can, You're gonna see how it's done.

The presentation will also detail how communities are expected to form based around trust. This will enable gamers to interact in the single-player games of others without interfering in the core experience.

Of course, this will not be a feature in every single game, though some games, notably launch title Perfect Dark Zero, will see this function. You may have heard the phrase anti-co-op play being bandied around of late? This is it. And there?ll be a lot of it.

We unfortunately cannot offer more precise details of the Xbox Live program at time of press, though of course SPOnG will keep digging and keep you updated with any developments. Stay tuned.

Note: An outline of the characters in the presentation:

One: Quadraphenia. He's about 25, dark hair, and is British.

TigerUppercut 26 Apr 2005 11:52
2/9
THIS NEWS STORY IS DEDICATED TO PETER MOORE
more comments below our sponsor's message

It seems that the company takes the security of its strategic marketing information and as seriously as its OS security.

Either that or another well planned "leak".

OptimusP 26 Apr 2005 17:39
5/9
So your friends can play as the enemy...the enemy that can be shot down with a couple of bullets.
The reason why the anti-co-op didn't work was just that reason: the enemy dies to quickly. Or are they planning to boast up the health stats of the enemy your friend plays? Then your deathmatching all the time, in the singleplayer...I don't want that...

You need several key ingredients to make this work.
1) a bloody good developer that can balance levels, characters and weapons like baking pie (that leaves about...5% of the entire developer community)
2) lots of booze and chips when you're playing it...and add some more booze to it.

The only genre i can see this work are the realistic shooters (ghost recon, rainbow Six ect.).

Anti-cooperative worked damn fine on many games. The POINT was that the "counter-operative" was vulnerable, but had as many lives as he needed, while the other guy had one. It's the thrill of knowing that, though the one you're using at the moment may die, he may take the other guy down at the time and win it. That same vulnerability stopped it being easy, because one good shot and BAM! next guy.

I think it's a great idea, especially in games like The Sims/Urbz and RPGs.

i actually think ti would be cool if this worked well. playign an entire single player game populated with realisticly acting characters... woudl be neat if they had the voices come ou tof the speakers... but then there woudl alwys be soem guy yelling stupid s**t.. and of course if they wherent actualyl trying that woudl be kind of weak... like if they just ran the wrong way or shot thee own team mates... depending on how you set it up the enemy weapons coudl do as much the main charcters and the main charcter woudl just have more health.

so i dunno... much liek nintendos 3d display and gyroscopic controller ideas... this has alot of potential but it coudl also be a roaring failure.

king skins 27 Apr 2005 11:29
8/9
I suppose it completely depends on how all this is implemented. Like LUPOS said it either gonna be amazing or crap...

It could be cool in a Rainbow Six type game to be able to setup the guards and their patrol routes and so on within the level :) So your the level designer and your setting up all the enemy placements for your friends to have to fight through. So you can setup traps and ambushes, could be sweet.

Didn't some RPG game do this a while back? Where one one person would be the Game Master and would set the game up for everyone else to play. Can't remember the games name tho...

So this is not necessarily gonna be a permanent death matching experience (as someone suggested earlier), this feature could be implemented in a number of different ways.

Also they are already implementing some of these features they have been talking about for the Xbox 360 in FORZA Motorsport.
* Customization: Being able to paint and design your own cars and take these online.
* Online Solo Game: Ability to play the entire Career mode online against real people rather than racing the AI cars.
* Micro payments: Although the micro payments will not actually be present you will be able to buy and trade cars online and get more in game credits from selling your cars online. So there will be an in game market place rather than an in system market place, but it will be an interesting test of the concept to see how it works out.

Could be an interesting game to look at to get an idea of where M$ are thinking of taking their games with the 360.

From what I can see from the developments they are making for the 360, they all seam to be based around 3 aspects
* getting people to play the games for longer;
* getting them emotionally attached to games and the assets within the games;
* getting more money out of users as they are playing the games longer.

Also with the mentioning of episodic content, demos, downloads this could be a good way forward for the industry. As games development is going to take longer and become more expensive people are going to have to try and get more money out of the games they are making and the only way to do that in the current system is to sell lots more games at the same price or charge more for the games. I think Ł40 is already to much, I don't take any chances on buying games unless I know they are gonna be good, but I have bought a lot of CD's for Ł7-12 just on the look of the covers, the type of music, track listing, etc. Hoping I would discover something amazing, I have bought some real gems and some complete s**te! But I'm nott gonna risk buying something I have never heard of or know little about for Ł40 and possibly end up with an a pile of s**t.

Something is gonna have to change within the games industry this publisher/developer relationship and retail system we have in place at the moment is going to kill the industry, its slowly spiralling out of control and slowly strangling itself.

Anyway, starting to rant... must stop now! must get back to doing some work!

DaPistolPat 27 Apr 2005 14:35
9/9
Nope your all wrong it is not going to be amazing or crap its gonna be 360 biatch hah, which is well back where they started I think.
Posting of new comments is now locked for this page.