Fable 2 and Project Gotham for Xbox 2

World not shocked as big name series make the leap. 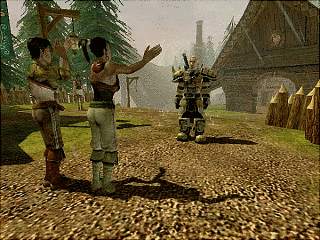 Fable: The slow clap...
As the chatter of the games industry fades to the pre-E2 sealed-lips silence, the familiar sound of the news barrel being scraped replaces the gossiping. This being the case, enjoy today?s predictable news involving two key Xbox franchises moving across to the Xbox 360.

In an interview with the official Xbox site, Shane Kim, head of Microsoft Game Studios, has revealed that the next Project Gotham and Fable games will appear on the Xbox 360. Can you imagine?

?Without giving away all the surprises we have in store, gamers that love franchises like Halo, Fable, and Project Gotham Racing can safely assume we will continue to invest in them as we move into the next generation,? commented Kim.

However, this does raise the question of what will be released for the current Xbox on the run up to the launch of its successor? In the next few weeks - in Europe at least - we get Forza, Unreal Championship 2 and Doom III, though after April, the situation isn?t looking particularly healthy.

Retail and publishing sources have indicated to SPOnG and several other publications that numbers of the current machine will be short as Microsoft?s focus shifts to launching its new baby, about which the most telling details can be found here.

As ever, we?ll keep a look out and update you accordingly.
Companies: Microsoft Game Studios
People: Shane Kim

Joji 4 Apr 2005 15:12
1/9
Good news for Xbox fans but as said no real surprise. Lets hope Mr Molyneux gets all what he wanted to get in the original Fable into the sequel.

shediesinred 4 Apr 2005 18:27
3/9
Yea.. I?m not so thrilled; it?s not encouraging to already see the announcement of 20 bazillion sequels to a system that?s not even out yet. I hope they come up with some original titles instead of rehashing sequel after sequel like they did on the current generation.

fluffstardx 4 Apr 2005 19:23
5/9
It's good to see old and new IPs on the Xenon. Remember, a shedload of Jap development studios the size of gnats have signed up exclusively, including Mr Final Fantasy himself.

If Lionhead learn from the v1.01 that the modders put out, Fable 2 will be better. Anyone who's played the aforementioned super-hard patch (white balverines abound! 3 times the enemies! An actual need to use hired swords!) will know it'd be a good lesson to learn.

The ability to make your own tattoos and hairstyles would be nice. Maybe customisable/augmentable armour too?

kid_77 4 Apr 2005 19:33
6/9
I thought Fable was an engaging game. Ok, it didn't quite live up to the insane hype - but it still made some bounds in the RPG genre, namely your actions affecting the NPC's around you. But if Lionhead Studios can really progress the Good/ Evil concept with the sequel, by introducing a political and/ or sociolgical dimension.

Do you work as a spy or mercenary for the king of a city, and become an ally. Or have you heard about the ludicrous value of his crown jewels, and decide to sneak in and steal them, with the risk of having a bounty on your head?

Damien Knight 5 Apr 2005 00:25
7/9
Yeah I know what you mean. Its just when it comes to games...its usually fifty bucks. Thats alot of money. I'm pretty skeptical of any game that comes out and I know nothing about. I've bought to many duds in the past. I like to stick to games that have proven themselves to me. I like the Resident Evil series, so I'll buy any sequel they make. The same thing with Fable. I wasn't around for the hype, I just happened to read a review on it, and took it home and fell in love with the game. I'm a Final Fantasy Fan so I like games that are 40 hours plus.... Then I feel I paid my moneys worth. Next sytems are going to go for ten to fifteen bucks more. Ifs its not a game I am familiar with I wont spend that much money on it. No way no how. Last month I bought Ubi Softs Cold fear for the X-box, and I hated it. So guess what? Fifty bucks down the drain! I took a chance on GOD of War, and I feel like I got my moneys worth. I guess you just have to be sure... Its a gamble no matter what....for me though Ill stick to developers that have proven themselves to me. Fable 2 is an awesome perc to buy an X-box 2, but if its not backwards compatible..... I wont buy it.....well not for a couple years or so....Maybe then I can get everything cheaper. lol!

Damien Knight 5 Apr 2005 00:28
8/9
shediesinred wrote:
Project Gotham 3.. I could care less!" -Yeah I feel the same way about that game... its like woop dee dooo *twirls finger in the air* Its not a game thats going to make me want the system. Another Halo game, Final fantasy, Fable, Ninja Gaiden... now those are games that call my attention....but still if its not "backwards compatible," I'll just wait on it.

neocarrillo 5 Apr 2005 04:18
9/9
I really wasn't a big fan of fable it was too short and was nothing compared to rpg's like final fantasy, shadow hearts, xenosaga, etc. Fable was basically the pc game black & white but instead of being a god which you could be good or evil based on your choices, your a dude who grow's up good or evil based on your choices.
I don't know about you guys but I think it's pretty s**tty that the big M is stopping xbox manufacturing in june, I know this to be true cause I asked a supervisor at eb games and he said the rumors were true, after june 6th no more xbox's. Since so far there might not be any backwards compatibility in xbox 360, people will have to keep there old bulky xbox in order to play halo, splinter cell, etc.
On top of that xbox 360 might cost 350-400 bucks and that's for the standard version with no hdd and on top of that games will cost 60-70 bucks. Man the big M might really mess up there sales with that, it's now that people find 50 bucks to be too much for a game.