Arguably the best kind! Gunbird duo for less than a tenner? 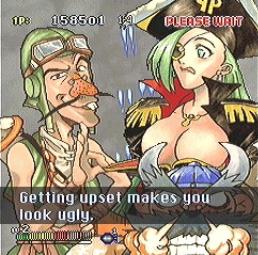 Empire?s Xplosiv budget range has stumped up the goods, with the news that Gunbird Special Edition will shortly be hitting the PlayStation 2 for a mere Ł9.99

The pack comprises the original game, as seen on the PlayStation and Saturn, and the Dreamcast version of Gunbird 2. Both games are ported from the smash hit coin-ops of the same name.

As you may know, the Gunbird games are a slightly pervy take on the up-scrolling shooter and dominated the non-beat-em-up sections of Japanese arcades at launch.

Hitting PlayStation 2 in March, SPOnG highly recommends this piece of pure gaming, if only to sharpen your skills for what might lie ahead.
Companies: Empire Interactive
Games: Gunbird Gunbird 2