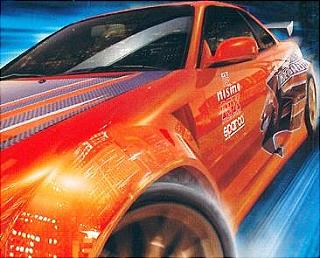 SPOnG can today exclusively blow the lid on Electronic Arts? next Need for Speed game, detailing the company?s thinking on the leading franchise update for the first time.

The series will ditch the Underground moniker, with the new game carrying the title Need for Speed: Most Wanted. The information, leaked to us last week, states that the multi-platform offering will ship across the world in late 2005.

Most Wanted will be available for Xbox 2, Xbox, PlayStation 2, GameCube, PC, PSP and ?Game Boy Advance or Nintendo DS.? A pleasant added value news snippet details a ??simultaneous ship, with the western Xbox2 platform", which indicates a late 2005 release for Xbox2 too. Though whether the machine will go under the ?Xbox2? name is unclear. But the launch period, as dated by the world?s leading third-party publisher, can now be pencilled in.

The picture we get is of a game that is not really too different from the Underground duo, with one key difference: Most Wanted takes the series back to its roots, with police chases making up the body of the gameplay. We expect the game to feature a much greater emphasis on movie style police getaway missions, in levels specifically designed to emphasise this aspect of the game, with gameplay focussing on eluding police pursuit vehicles. The game will also feature other multiple action modes such as race, circuit, sprint and knockout.

There will also also be a rap-sheet system, in which a player?s notoriety is upped by performing more dangerous manoeuvres in the view of following police.

Four distinct 'regions' will be offered, along with real time weather and an evolving environment. There will be no racing during the night-time, with all the action taking place between sun up and sunset.

Around 100 motors will be on offer. ?Asian import (tuners), exotics, American muscle and Euro imports,? as detailed by EA.

Oh, one more thing! Burnout 4 is slated for Xbox 2 launch.

I'll believe it when I see it, or when I hear it straight from EA and Microsoft's mouths.

Autobot 17 Jan 2005 21:03
2/16
I'm excited!!!! A Word EXCLUSIVE!!!!! ahahahahaahahahahahahahahahahahaah that was sooo funny Thanks SPONG for the comic relief. As for the the actual story I thought that rather cool, I live Burnout 3 and having part 4 comming out for the XBOX 2 and in this year no less is exciting!!!!! XBOX 2 is going to own us all (right after that Bill Gates buys souls on Ebay for a low low price of 19.99 each!)
more comments below our sponsor's message

LUPOS 17 Jan 2005 21:10
3/16
SON OF A BITCH!!!
i love burnout 3 sooo much... i actually spent about 5 hours playing multiplayer just yesterday... but i have sworn of EA games for the foreseable future (which is unfortunate as criterion will have to suffer despite a lack of wrongdoing on their part). Its going to be sooo pretty too! burnout on next gen hardware *drooools* so many shiny bits of car flying all over the place... with big explosions and crashes and awsome... i need to use the rest room... brb.....
_____________

Anyway, this is quite interesting. Has a publisher ever actually announced games for a system before the manufacturer has actually officially unveiled the final design, name, and spec?? I can't think of this happening before, off hand?

config 18 Jan 2005 12:41
7/16
lex_vc wrote:
We're supposed to believe this when you can't even spell w-o-r-l-d right?
Rock on, you found a typo. That's earth shattering, and utterly destroys the credibility of the story.

It's not like you're a particularly reliable source. Plus, you did NOT post scans, at least not that I can see.
Was there any comment that scans were posted?
Let's read that sentence properly this time...

"We?ll post screens, hopefully of a higher quality than scans from our hard-copy document, if and when they arise."

It reads that screens will be posted when there are decent quality ones available. I'm guessing the scans mentioned were of such a poor quality that they weren't worth posting. Maybe they were faxed or snapshots via a camera phone?

I'll believe it when I see it, or when I hear it straight from EA and Microsoft's mouths.
And when the truth is out and the leak is proven to be true, I predict you won't be available for comment, because you'll be hiding in a corner feeling like a right t**t.

DoctorDee 18 Jan 2005 14:50
8/16
kid_77 wrote:
Has a publisher ever actually announced games for a system before the manufacturer has actually officially unveiled the final design, name, and spec?? I can't think of this happening before, off hand?

No, but to be fair, it used to be that you could produce a game in less time than a generation lifecycle.

Nowadays, though. I'm betting that publishers are working on their PS4 plans right now.

If Xbox2 got out of the door early it would be very interesting to see how it would sell. Would rather wait til E3 or something for confirmation. Cheers for the heads up anyway Spong.

kid_77 18 Jan 2005 15:39
10/16
Wouldn't surprise me! Developers can no longer knock out a reasonable release game in the time between receiving SDK hardware and the console going on retail.

Emulating the expected hardware to get dev off the ground is the norm, and the only way, I suppose. But it means games will look virtually the same across all platforms (Burnouts, POP's, EA Sports etc). The only time you see the differences in hardware, is in the AAA exclusives (Metroid, Halo, GT4).

Judging by this slip from Brad Smith (go down to 'Xbox and the Rotarians'), the Xbox 2 will be with us (as in U.S.) by Xmas.

Presuming Brad?s gaffe is actually accurate, it will be interesting to see how Ninty and Sony play it with the next gen. If it is true, then surely it won't be long before official demo video's will start to be released. Judging by the CPU and GPU specs available for Xbox 2, Half-Life 2 will run perfectly on it (and then some), and if people see this, Sony and Ninty better get moving.

config 18 Jan 2005 18:11
14/16
Adam M wrote:
I think that it's highly likely that Microsoft has already given EA the resources needed to develop for Xbox 2.
'Speshly given this news story from Dec 10th.

I'm pretty sure that EA will have a lot of they're sequels designed already, possibly even platform-generic prototypes in development. (Explains the screenshots).

Remember that they also own Renderware now, so they could just develop for their middleware rather than for a specific platform while Criterion finish developing the technology for platforms as they arrise. This approach would prevent some 'known' PS3/Xbox2 problems however as far as I'm aware even developers still don't know how powerful the Revolution will be, thus making it hard to develop middleware for that.