Wall of silence breeds fears - what is K7? 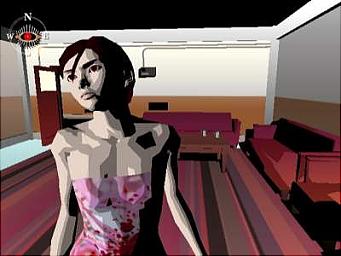 Capcom Japan has dated its long, long-awaited Killer 7 for GameCube and PlayStation 2, placing the game at March 24 on its release schedule.

This news comes somewhat out of the blue and ilustrates Capcom?s increasingly obvious policy of secrecy around the project. From the moment Killer 7 was announced - first touted as a GameCube exclusive - the hardcore elements of gaming were immediately fascinated. It looks fantastic, a cel-shaded film noir, ultra-violent anime romp, tailored to the very specific palette of Capcom?s original fanbase.

However, controversy has dogged the game from the outset. Capcom refused to show the code at any game show. It?s E3 showing was widely rumoured to be a decision taken by Nintendo, with the game appearing only in video form, in spite of being fairly advanced.

In recent weeks, word has reached SPOnG that is perhaps the most disturbing to date. The phrase ?almost point-and-click? was used by one SCEA insider, having spent significant time with the game. We have contacted Capcom repeatedly for solid gameplay details regarding K7, but to date have heard nothing.

We?ll watch the level of review activity on the run up to launch with great interest.
Companies: Capcom
Games: Killer 7

January 10, 2005 - The European division of Capcom made PAL gamers very happy people today, as it revealed the release dates for its 2005 crop of videogames. Check the list below to see where your favorites fall:

What exactly is the shame?

It doesn't say it's the European released date. It just points out that a game that has been delayed and delayed and delayed has finally been given a firm release date. The territory is irelevant - it's the FACT of a release that is important.
Posting of new comments is now locked for this page.